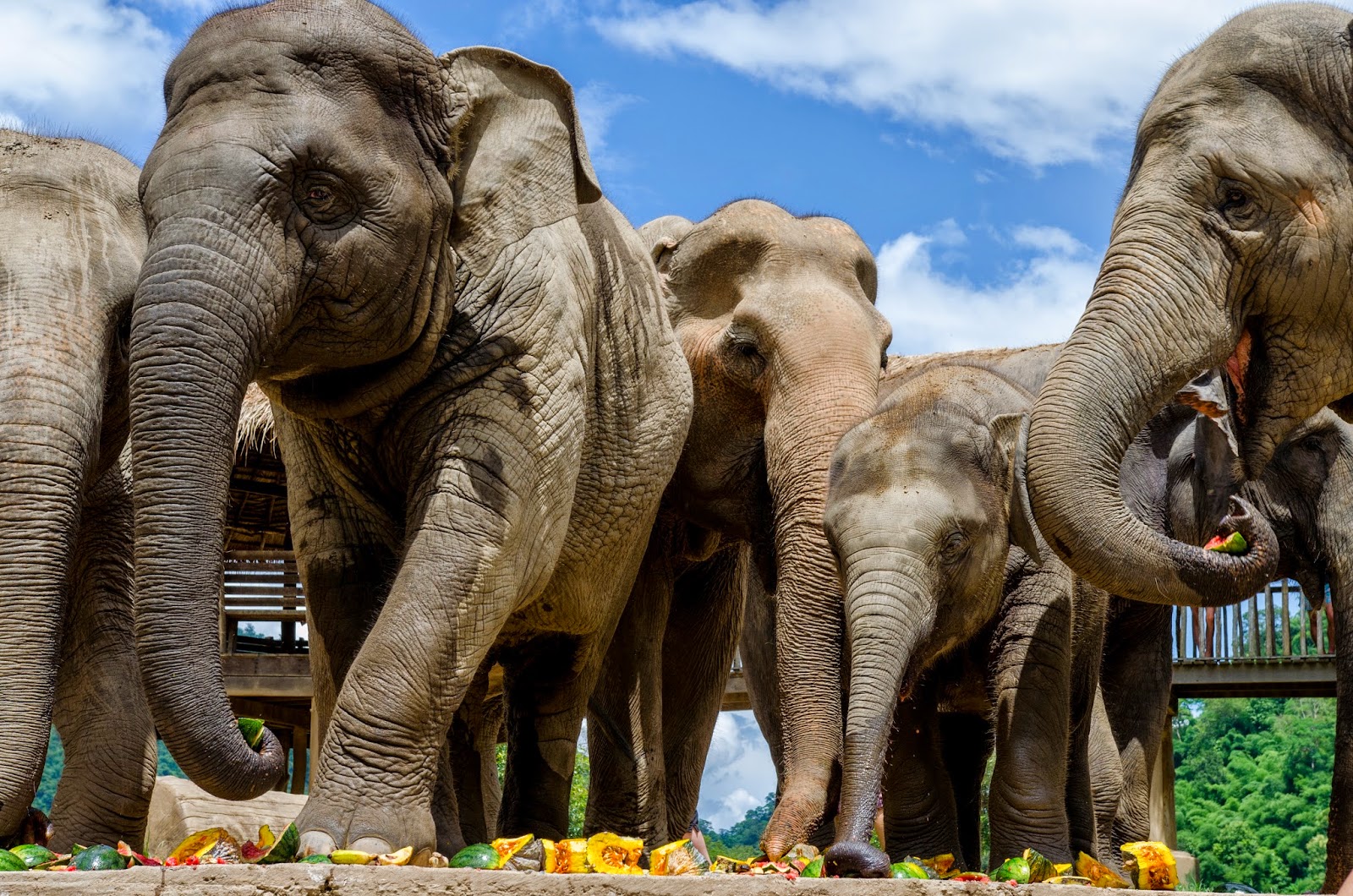 Having been lucky enough to find a great deal on a flight that allowed us to escape the notoriously difficult Cambodia-Thailand land border crossing, we boarded a flight in Siem Reap to Bangkok and hopped on a connection to Chiang Mai. The highlight of the trip was the chocolate croissants that James bought for us in Siem Reap to eat on the journey. They were flakey and buttery, and made us regret waiting until our last day in Cambodia to indulge in the country's famous pastries, a leftover from decades of French colonialism.


In Chiang Mai, we got dropped off in the Old City and proceeded to shop around for a guesthouse. We settled on Anoma Boutique House, and settled into a beautiful room decorated in minimalist Thai style with its own balcony. 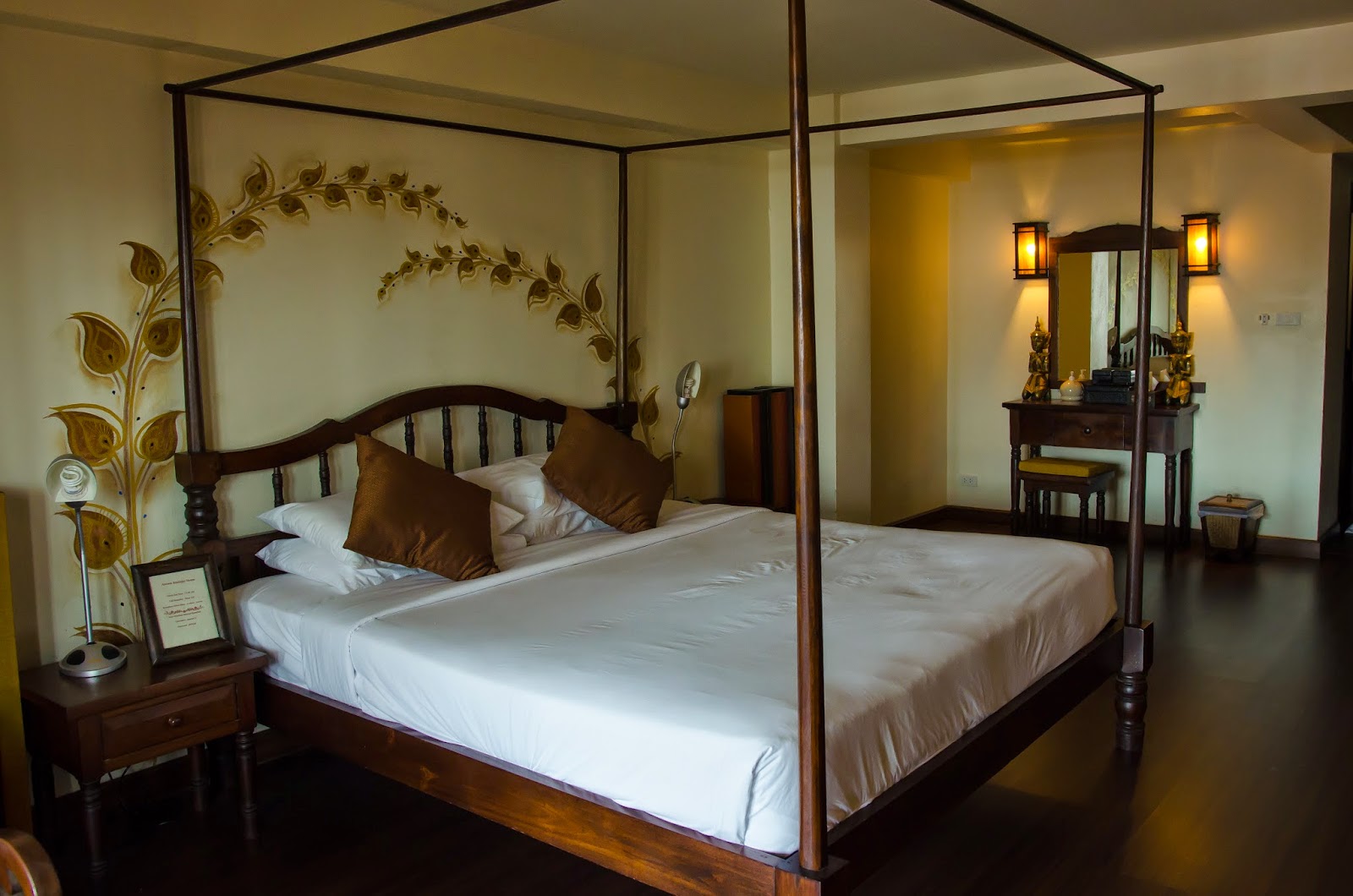 This room was our home base for the lovely week we spent exploring Chiang Mai. We put the brakes on our tourist pace and spent many leisurely afternoons wandering around the touristy but laid back Old City, exploring the markets, and enjoying drinks on our balcony; we also took turns suffering from mild colds, which helped to encourage an easy pace. But we did a few exciting things over the week that we will share with you.


On our first day, Antonia was eager to find some of the places she used to frequent when she lived in Chiang Mai eight years ago. The first trip down memory lane took place at lunchtime, but she wasn't confident that she would be able to find a particular restaurant because she couldn't remember its name, and after all, James will tell you that Antonia has a terrible sense of direction. But it turns out that when food is involved, her senses are heightened. She led James down Tha Pae Street based on her memory of a delicious mango cheesecake, and sure enough, she found it in the back of a menu of a familiar-looking restaurant called Ratana's Kitchen. We ate a delicious lunch, and of course, had to have dessert. 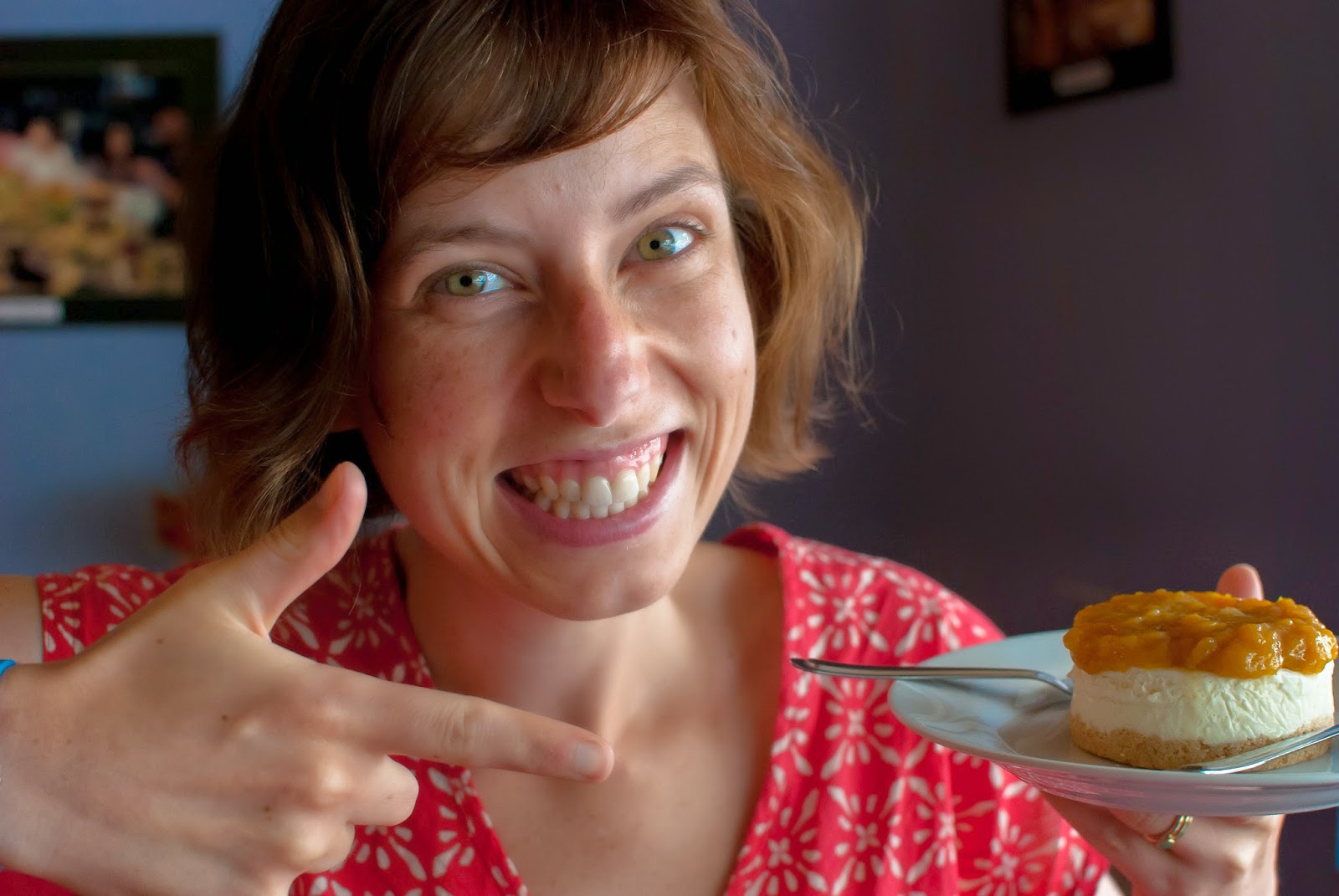 Antonia is just a little bit excited about being reunited with this cheesecake.

After lunch, we continued walking through Chinatown to a flower market near the Ping River. 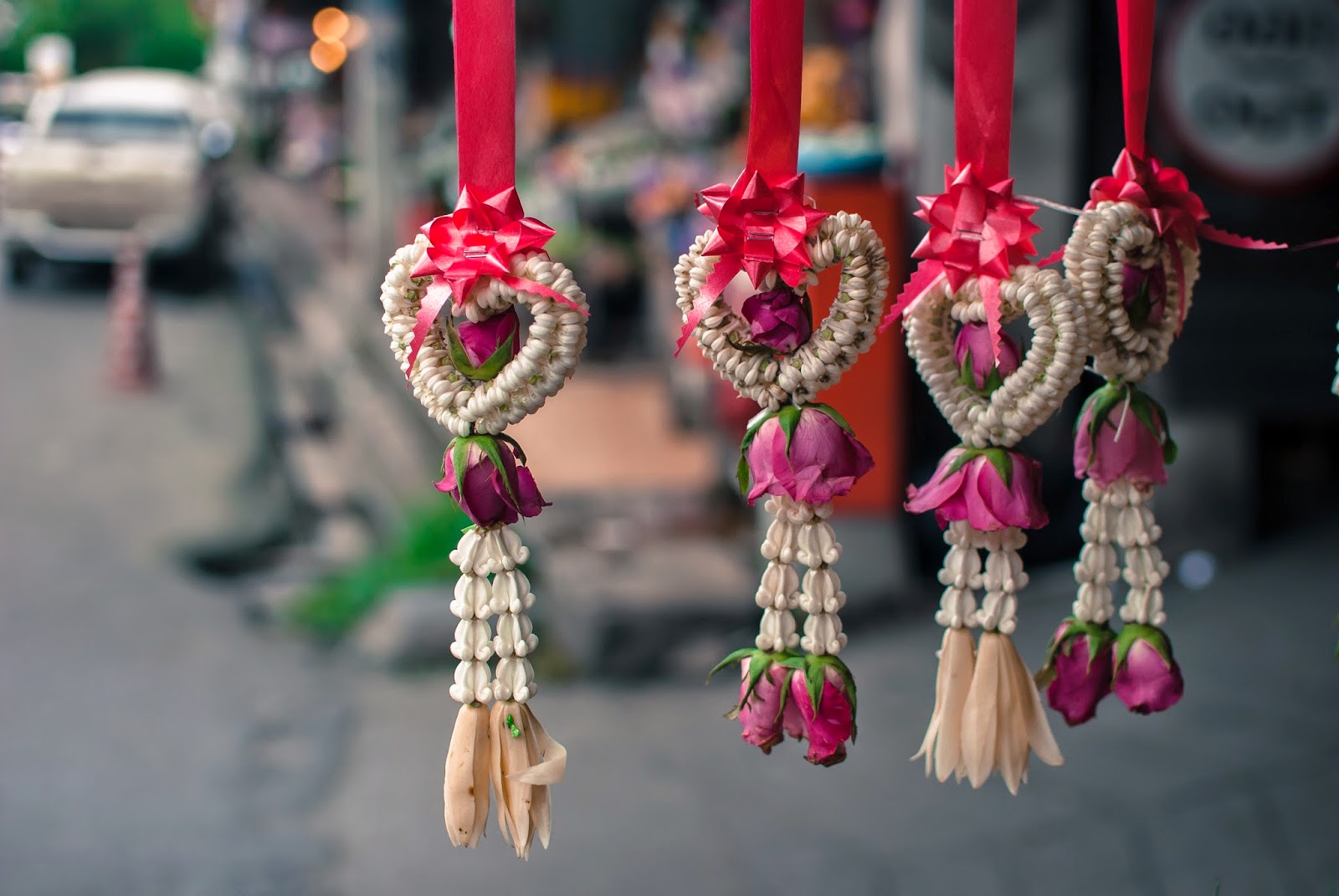 We decided to venture to the north of the city to try to find Antonia's former office and apartment building. We took a long tuk-tuk ride out of the touristy part of the city and were dropped off at the busy intersection at the corner of Antonia's old 'hood. We explored the streets nearby and were able to find the office, apartment building, and the local market where Antonia would eat nearly everyday. It was surreal for her to be back, and special to be able to show James where she spent her time all those years ago. 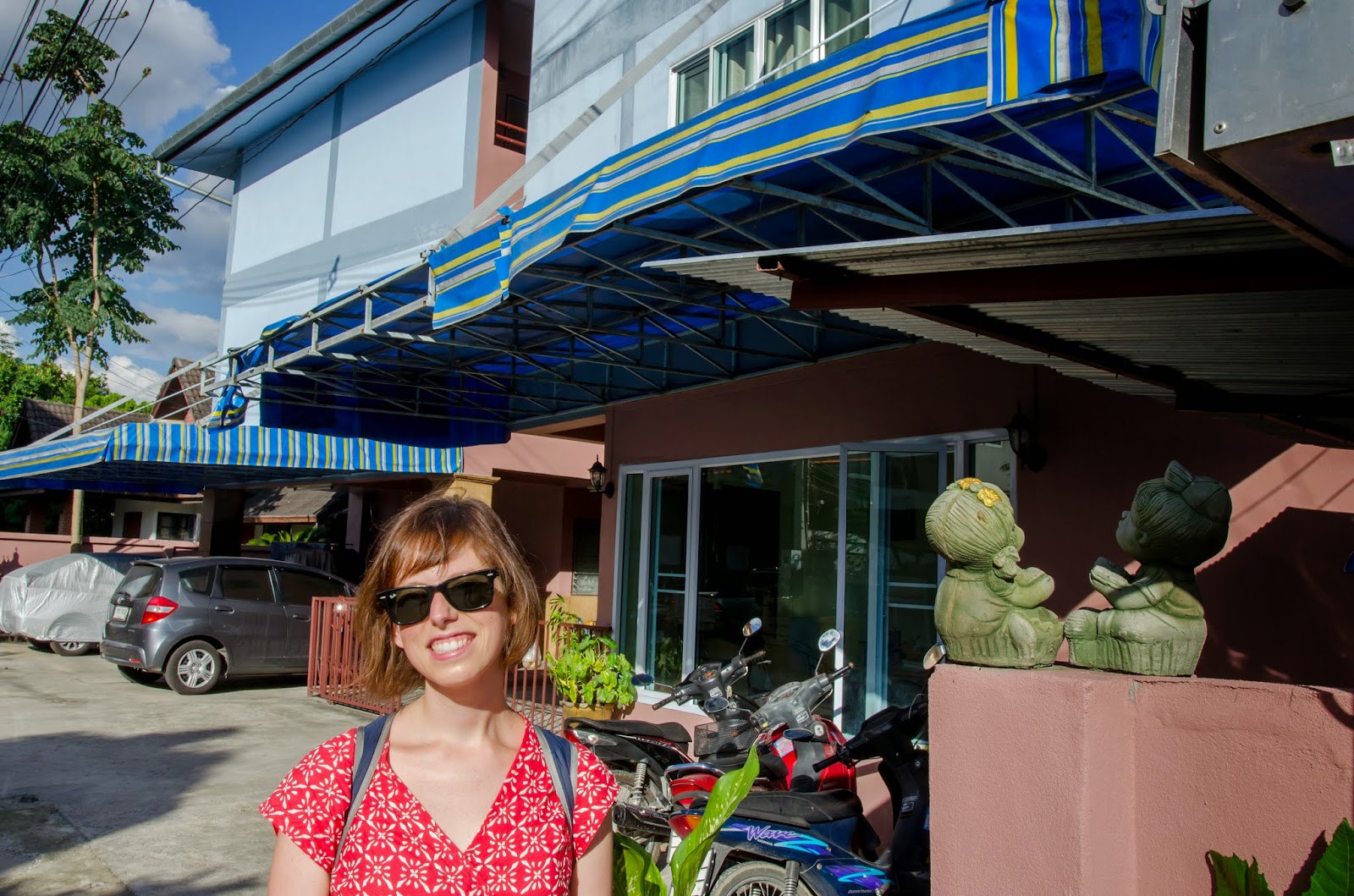 We spent many evenings at the Night Bazaar, but even better are the Saturday and Sunday markets. They have more locally-made goods and a more festive, community spirit; they are the place to go for weekend shopping and entertainment for both tourists and locals. 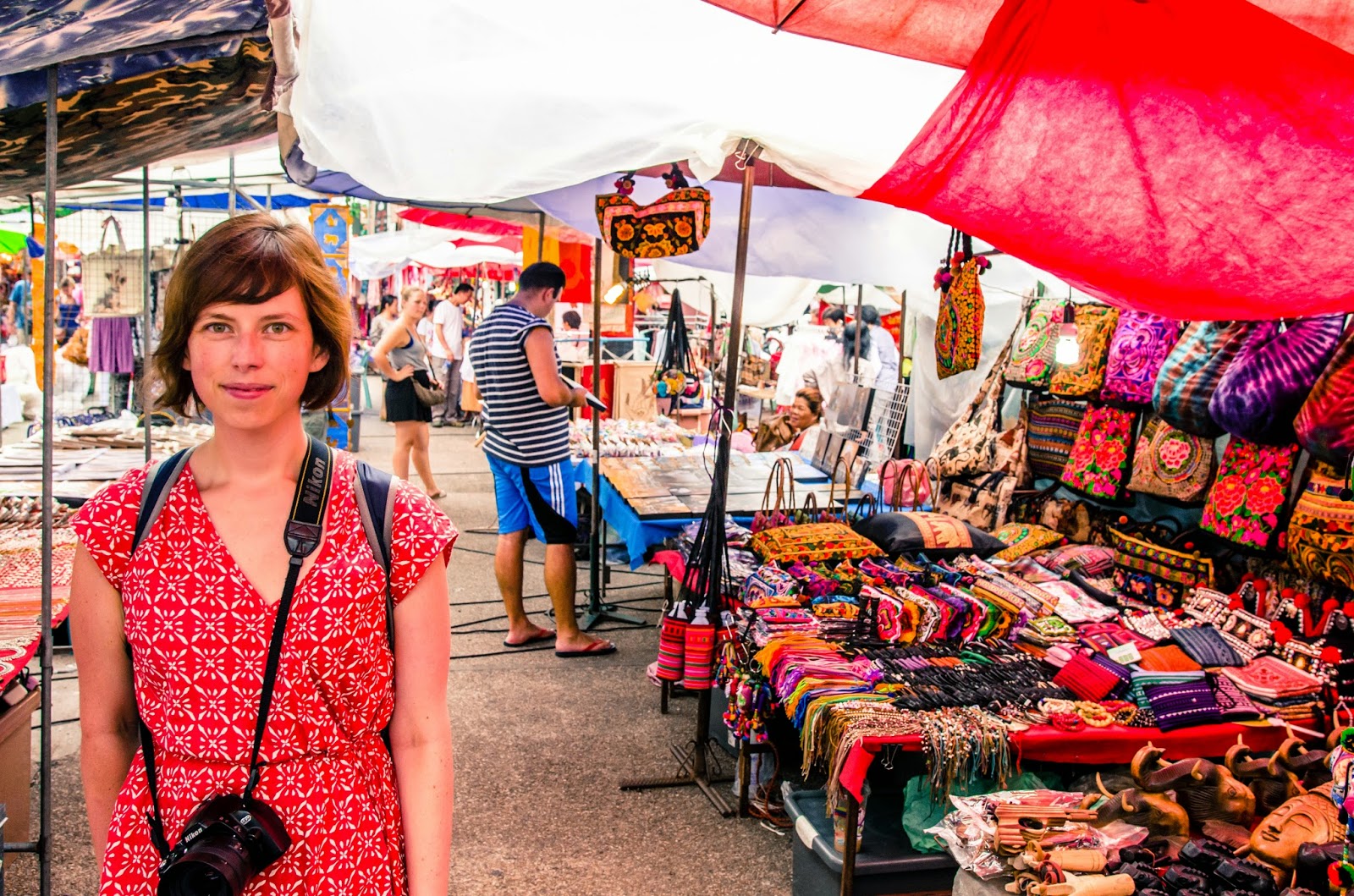 We got a bit turned around on our walk to the Saturday market, but we enjoyed the glimpses of local life in the little lanes that we got lost in. 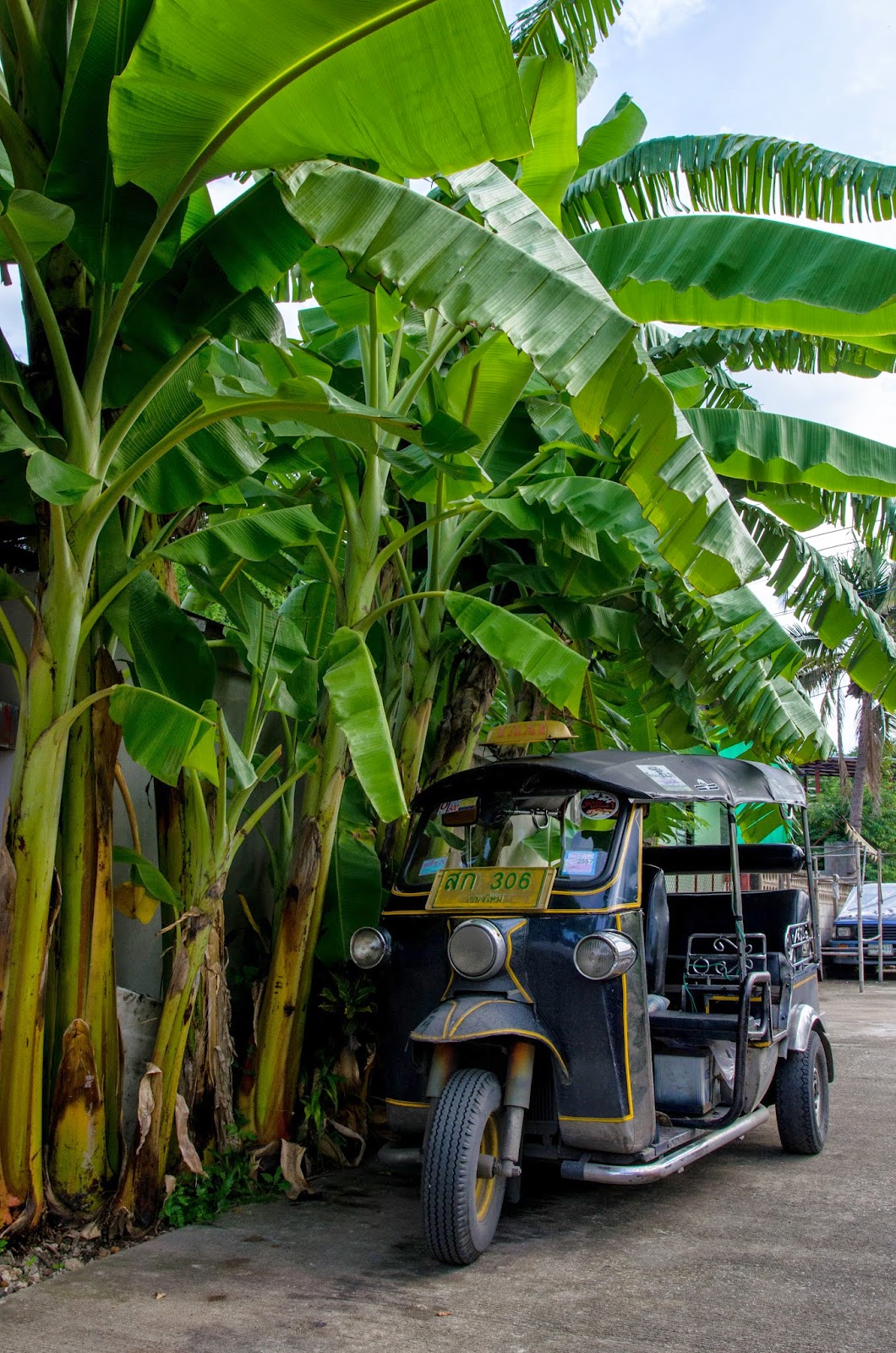 Antonia was especially excited for the Sunday market, but monsoon-grade rains put a damper on the evening. Before the skies opened up, though, we were able to share a delicious market dinner of spring rolls and pad thai. 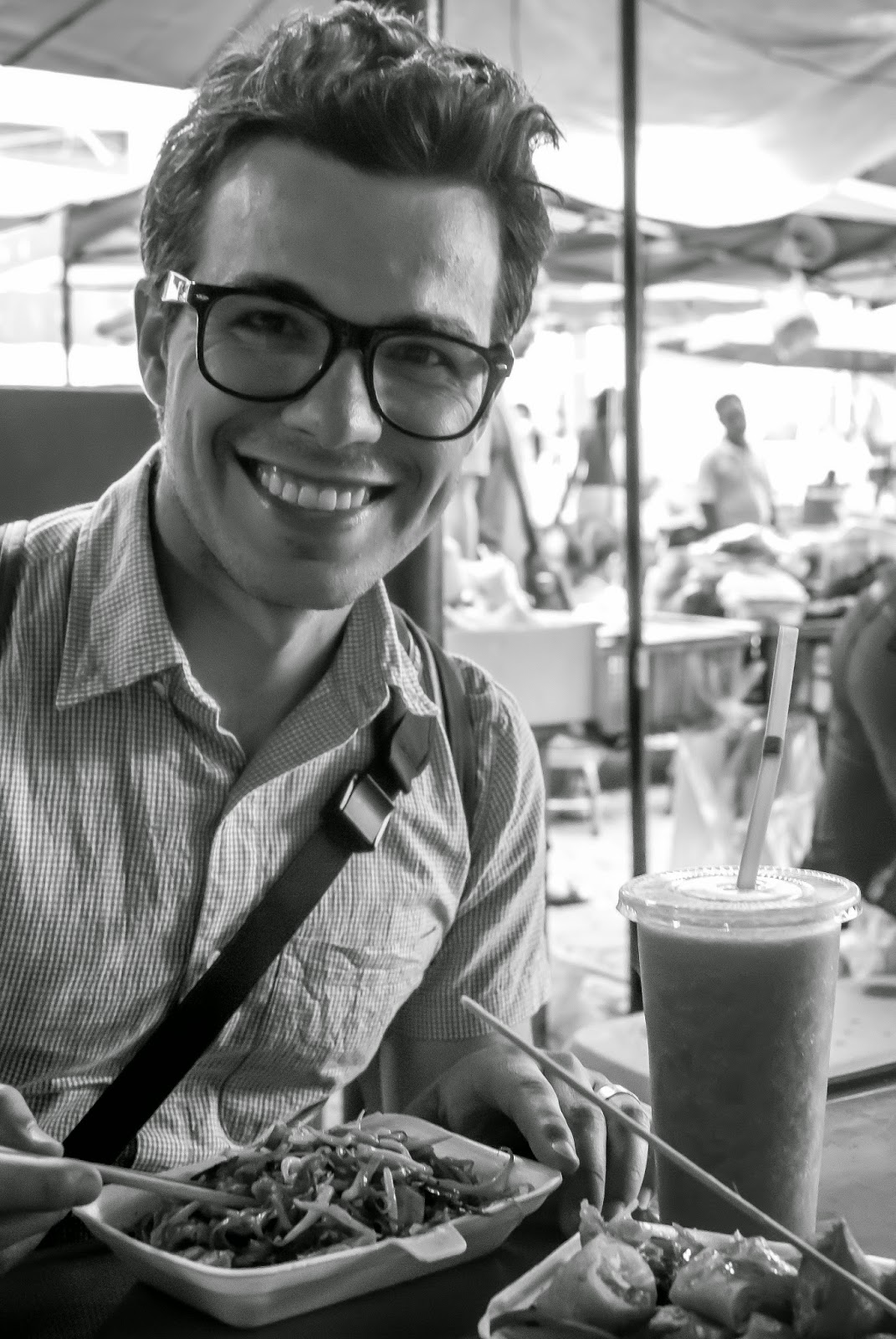 One super touristy but super fun thing that we did was go zip-lining with an outfit called "The Flight of the Gibbon," named after the path that a gibbon might take in the canopy of the rainforest of northern Thailand, just outside of Chiang Mai. We spent a couple of hours on more than thirty stations high in the trees, including some of the longest zip-lines in Asia, but also rope bridges and repel stations. 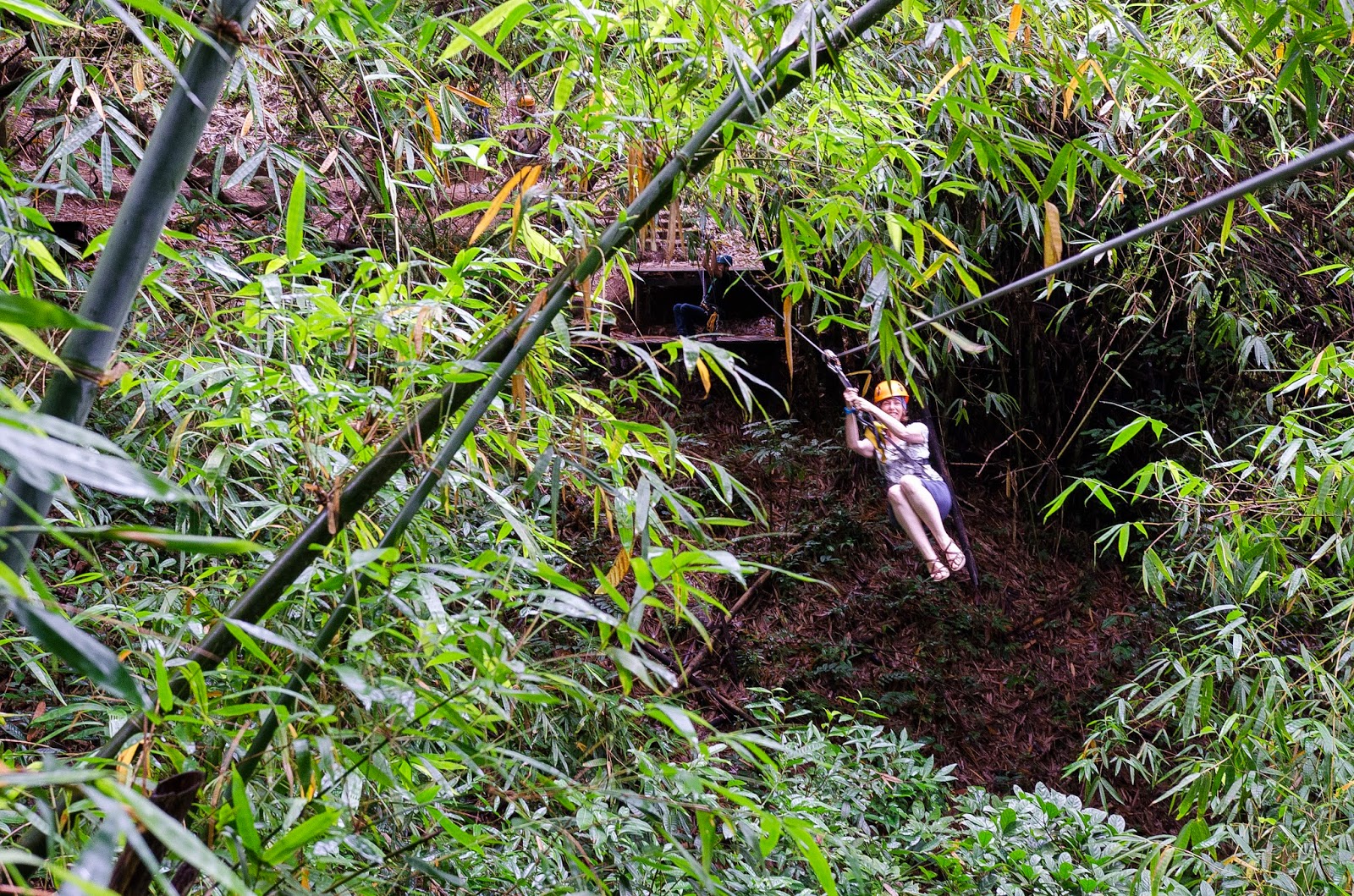 At one platform dubbed the "Superman Spiderman," the zip-line was attached to our back, making it extra scary to dive off the platform and then fly horizontally through the air until we ran into a large net that we had to grasp and climb up.


We relaxed from all of that excitement with massages back in Chiang Mai. Antonia melted into a foot massage as she watched the sun set in the open-air spa, but poor James had chosen a back massage that turned out to be in the Thai style. He reported that the masseuse put him in a full Nelson and cracked his entire spine, vertebrae by vertebrae. James is now zero for two for relaxing massages.

We took the time to see Doi Suthep, Chiang Mai's most sacred temple, and a very picturesque one at the summit of a mountain overlooking the city. 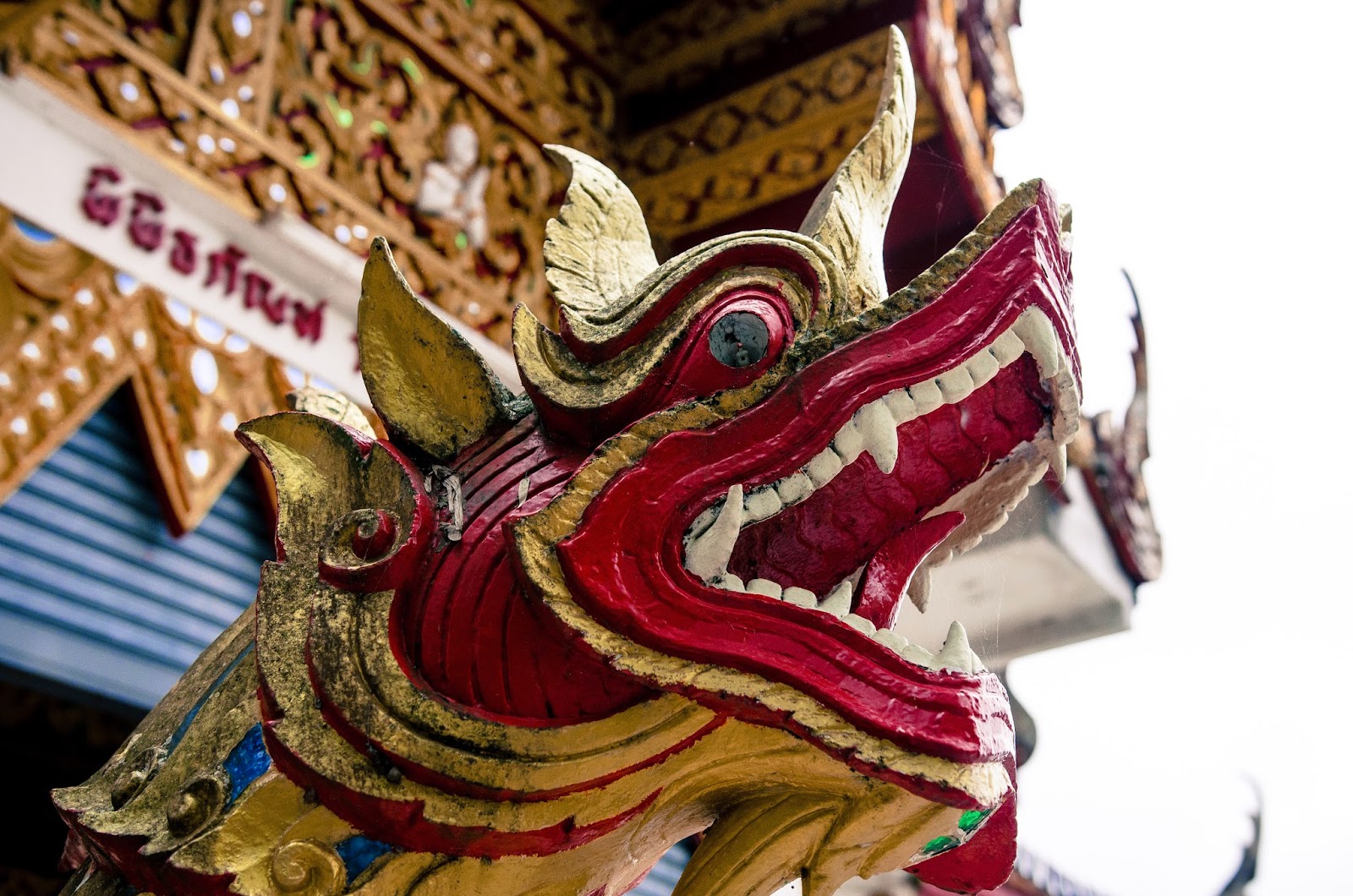 We took a very long and winding ride on the back of a truck cab that made us both a bit woozy as we walked up the long staircase toward the temple. 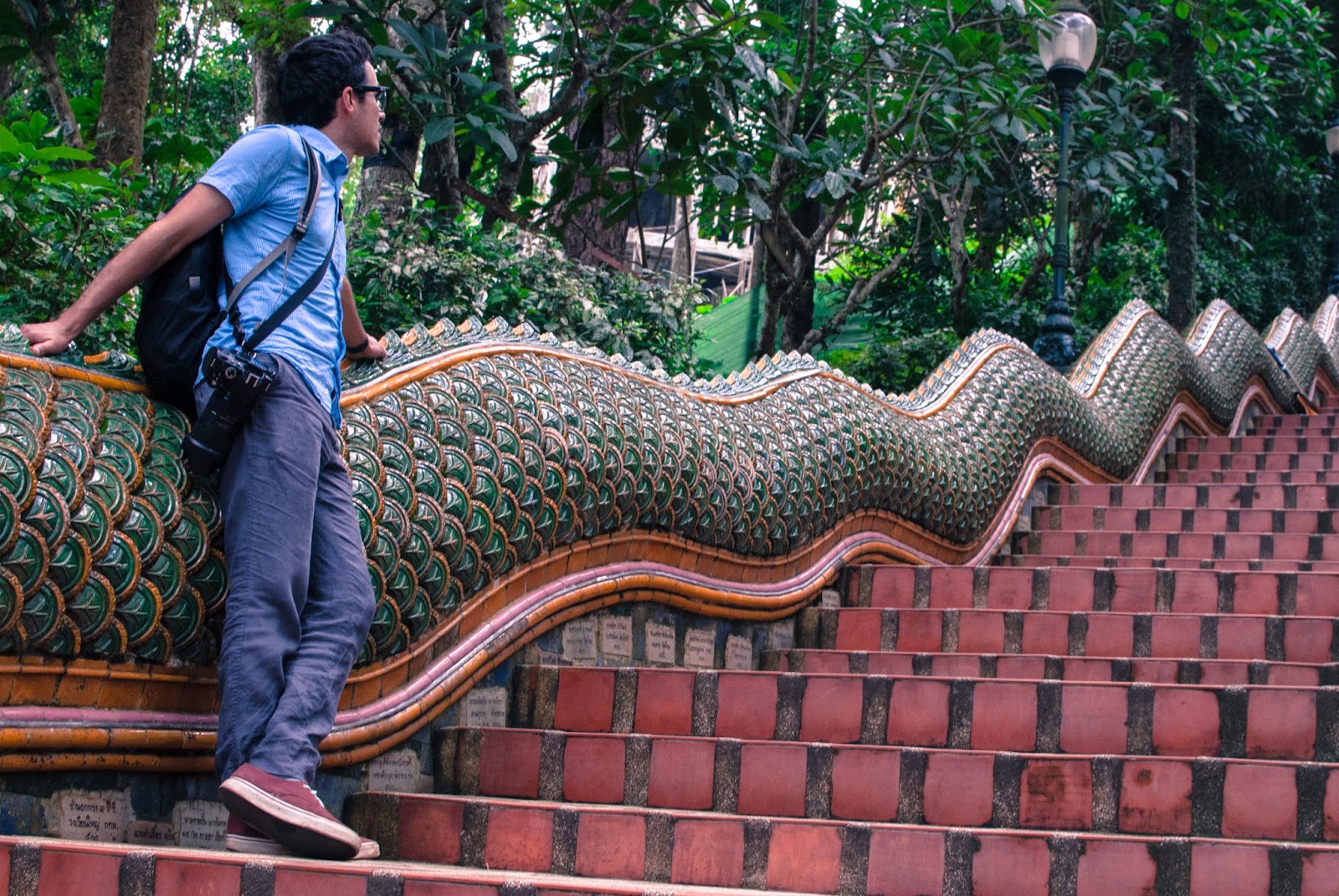 At the summit, we took in views of the city, as well as the glittering temple with its numerous golden and jade Buddhas. 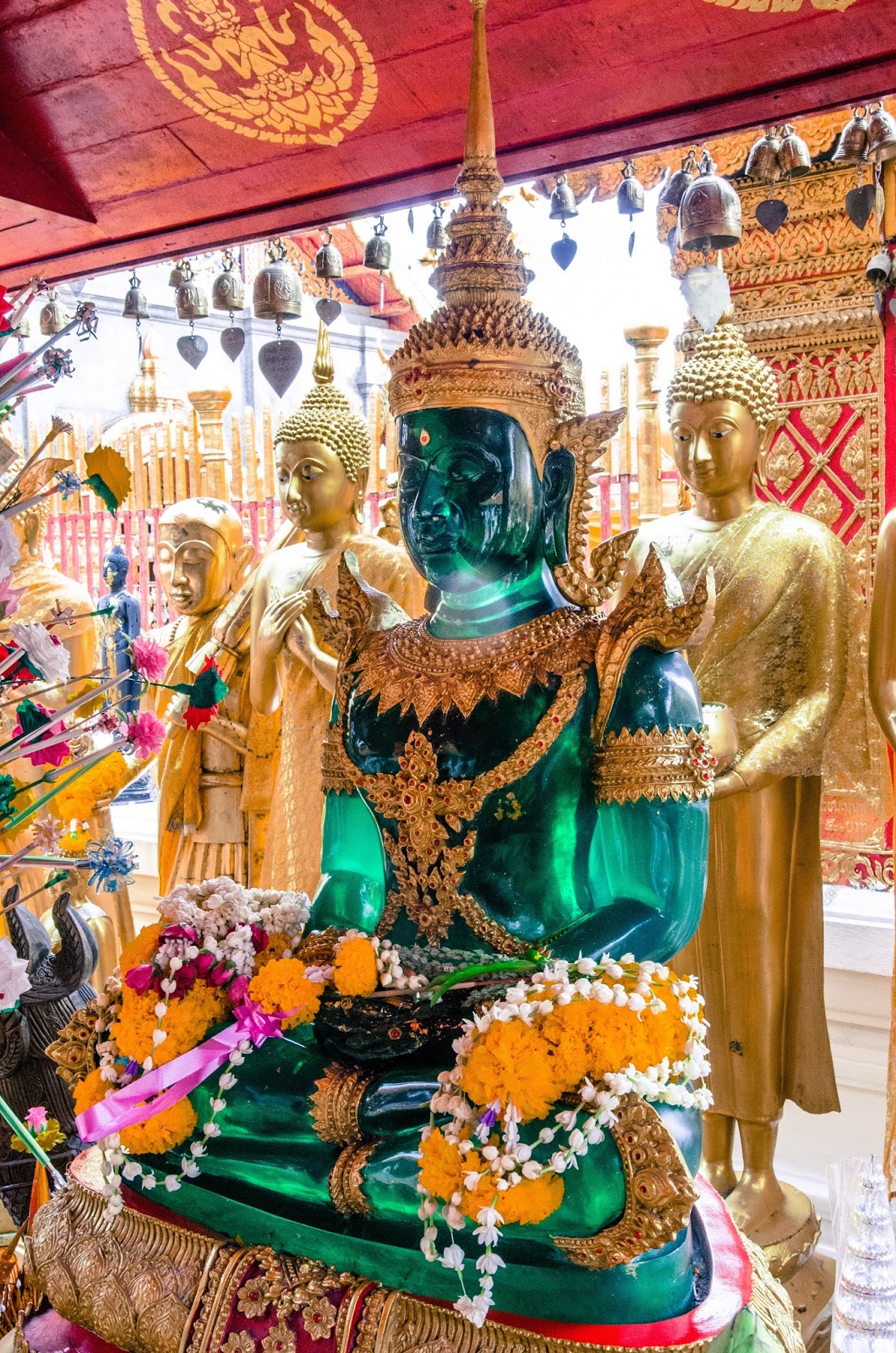 Our last day in Chiang Mai was our best, because we took a trip to the Elephant Nature Park to spend some time with elephants rescued from abusive conditions around Thailand - some have been made to haul logs, carry tourists on their backs, perform in circuses, and act as tourist attractions on the streets of Bangkok. The trip included education about the brutal methods of domestication that every elephant that works for people must endure. The Elephant Nature Park is a refuge for 39 elephants with some very sad histories who are allowed to roam the idyllic grounds as they please; there are no cages or chains, and absolutely no elephant shows or riding for tourists. It was exciting to arrive at the park and see the elephants roaming around freely. 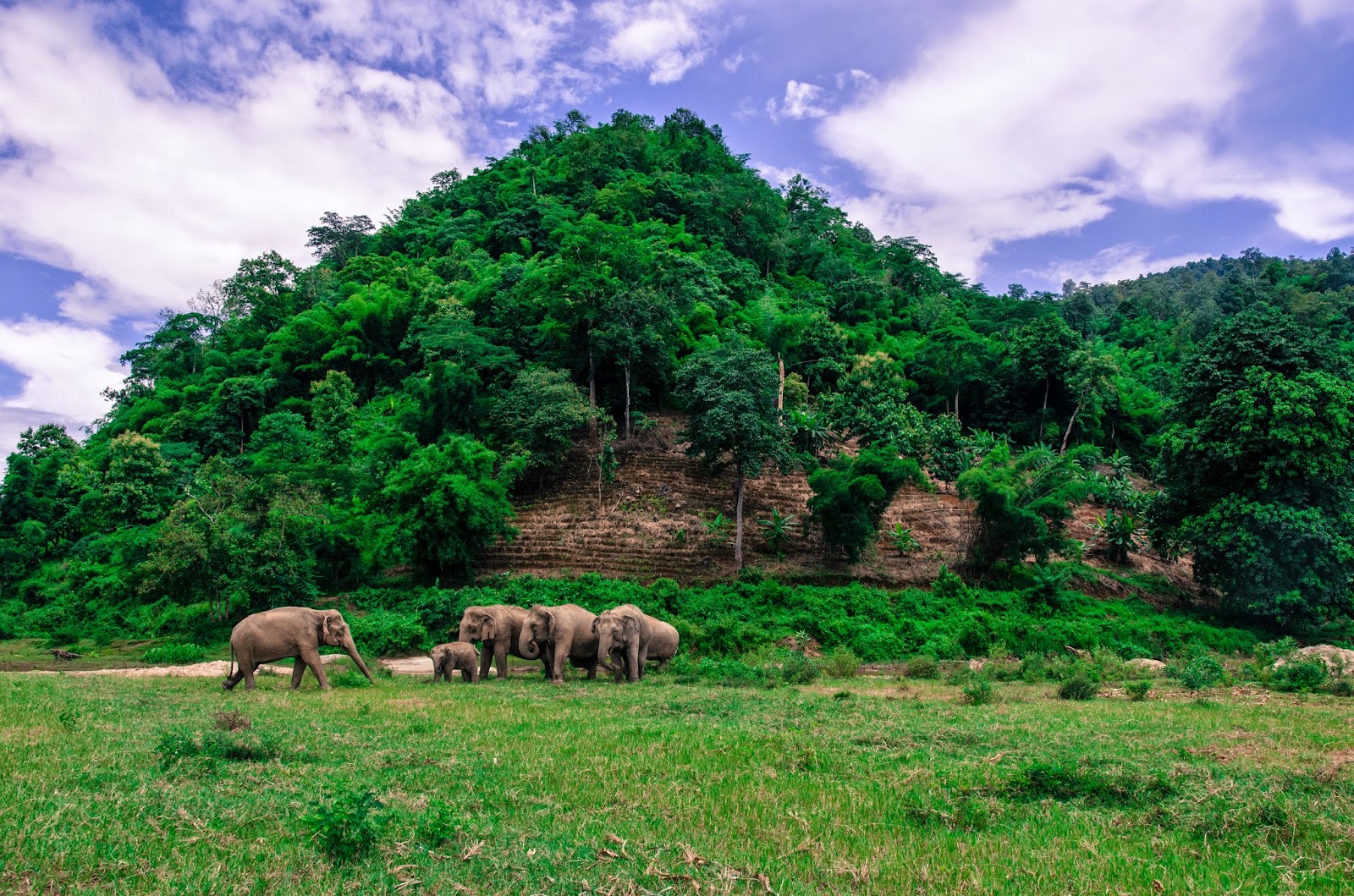 It was morning snack time when we arrived. 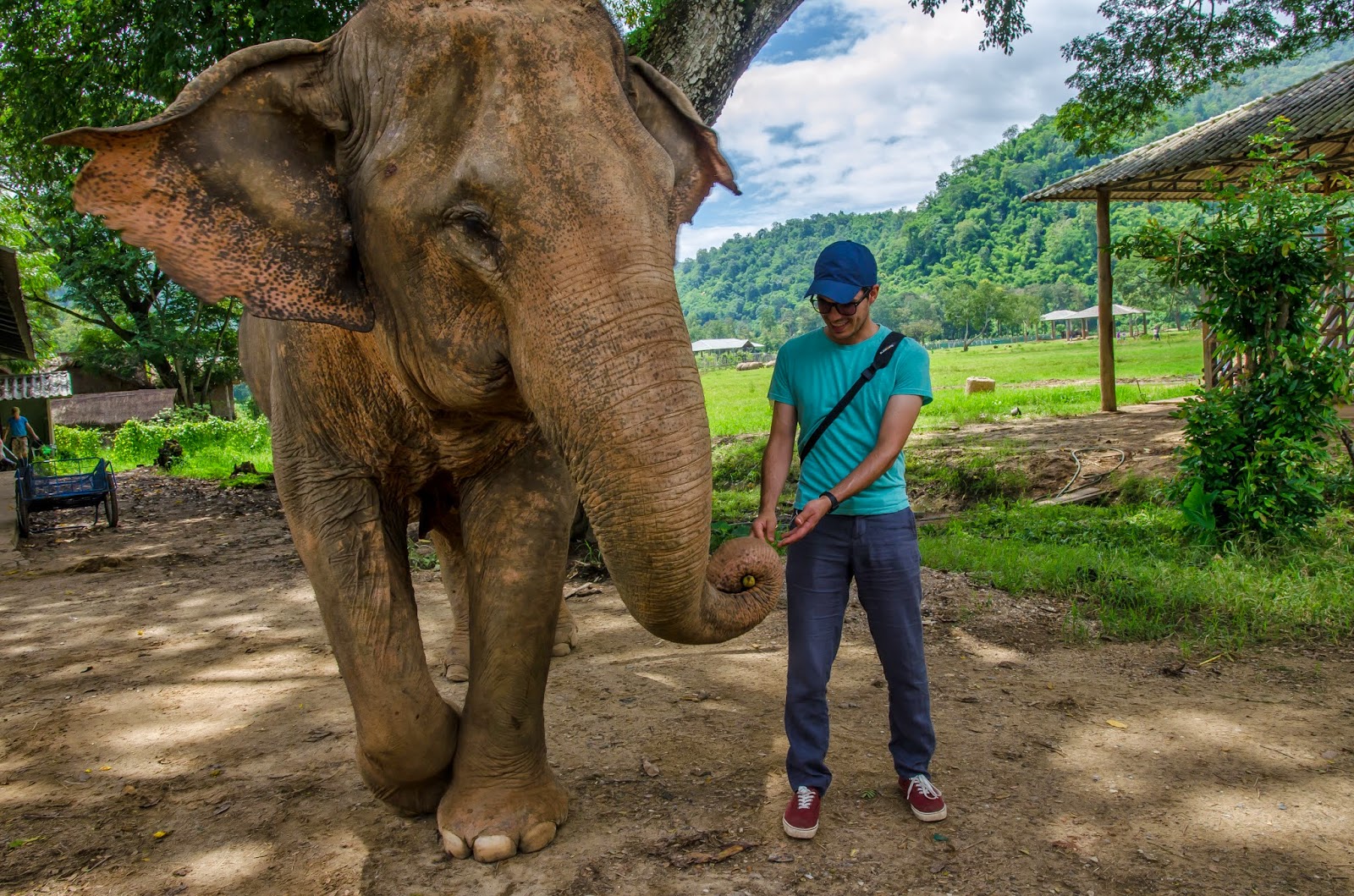 We got to meet many of the elephants and hear their stories. Several are injured from having stepped on land mines. After lunch, we got to wade into the river and wash Lucky, who was blinded from the spotlights that she was under each night as she performed in a circus. 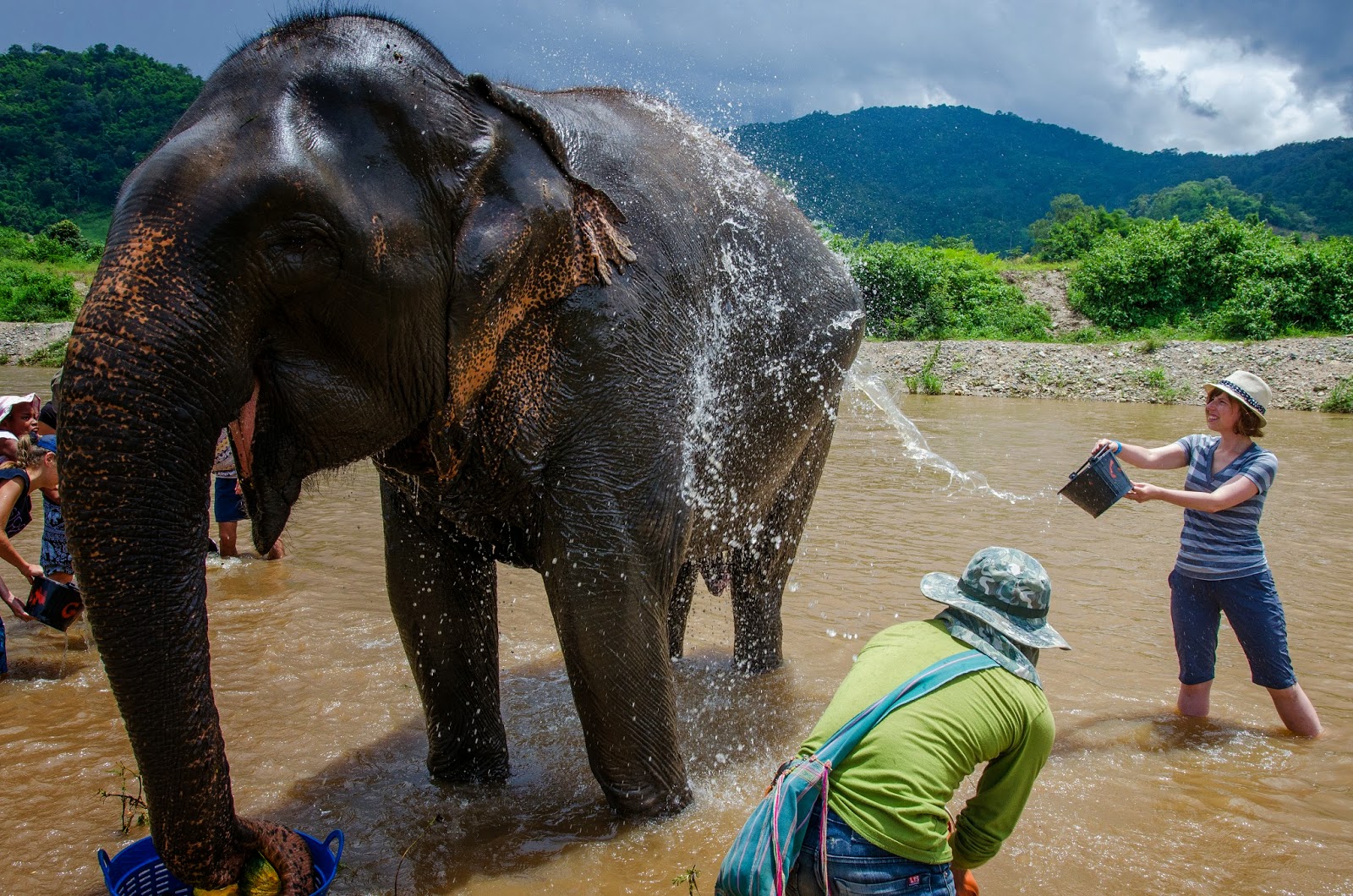 Antonia's favourite part of the day was simply walking around the beautiful surroundings and seeing the herds of elephants behaving in a (nearly) natural environment. In fact, one of the elephants who does not get along with another herd became agitated at one point, running, stomping, and trumpeting toward the other group. We also had to be cautious when Nawan, an incredibly cute one-year-old, made a distress call after getting himself caught in a tire swing. 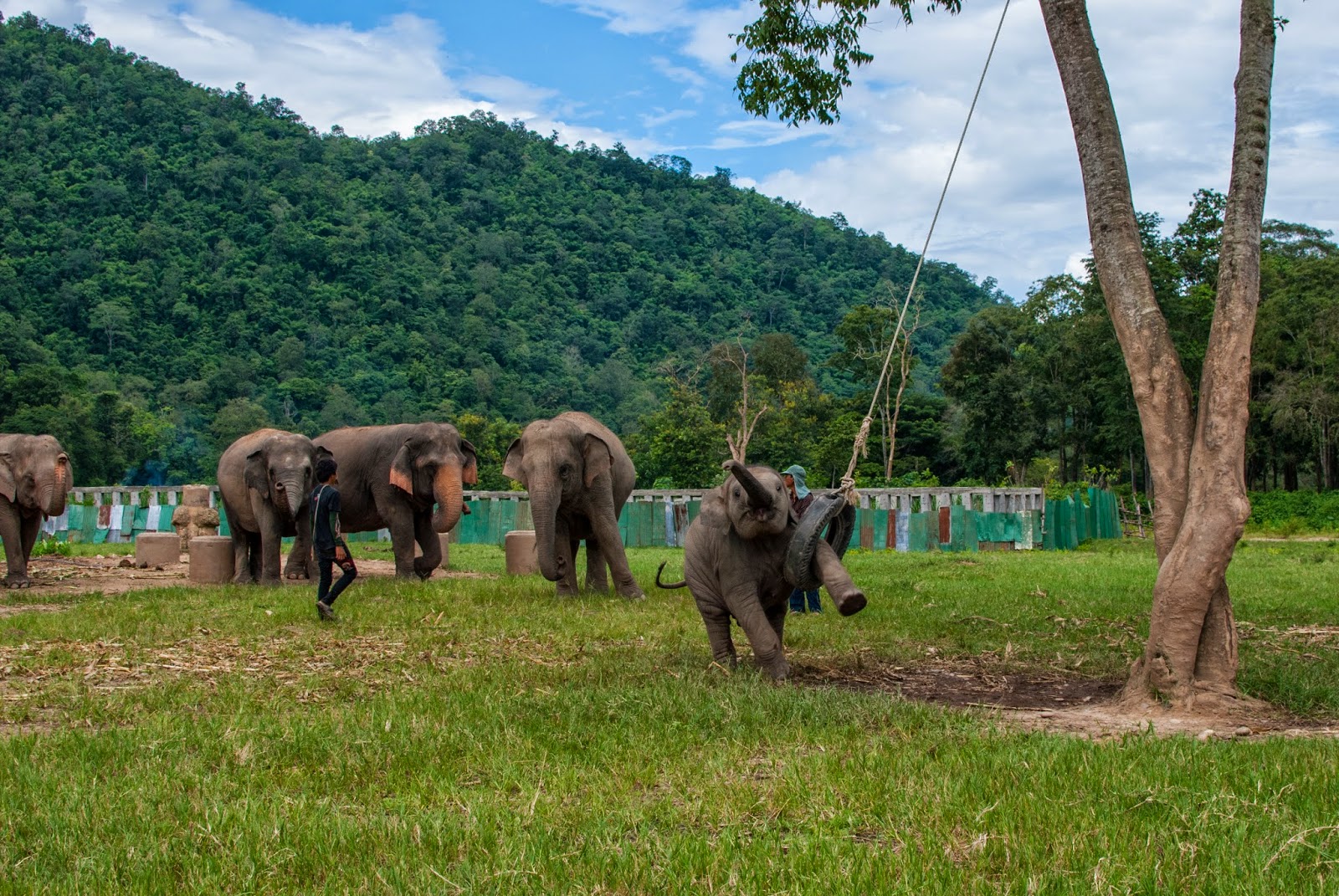 The members of his herd are very protective of him, and came running to aid him, then started moving toward us in a threatening manner in case we were the cause of the danger. We finished the day with another feeding, James' favourite part of the day. We were in charge of feeding Buanham, an elderly lady without any teeth, her afternoon meal - a bucket of pumpkin followed by a bucket of peeled watermelon. 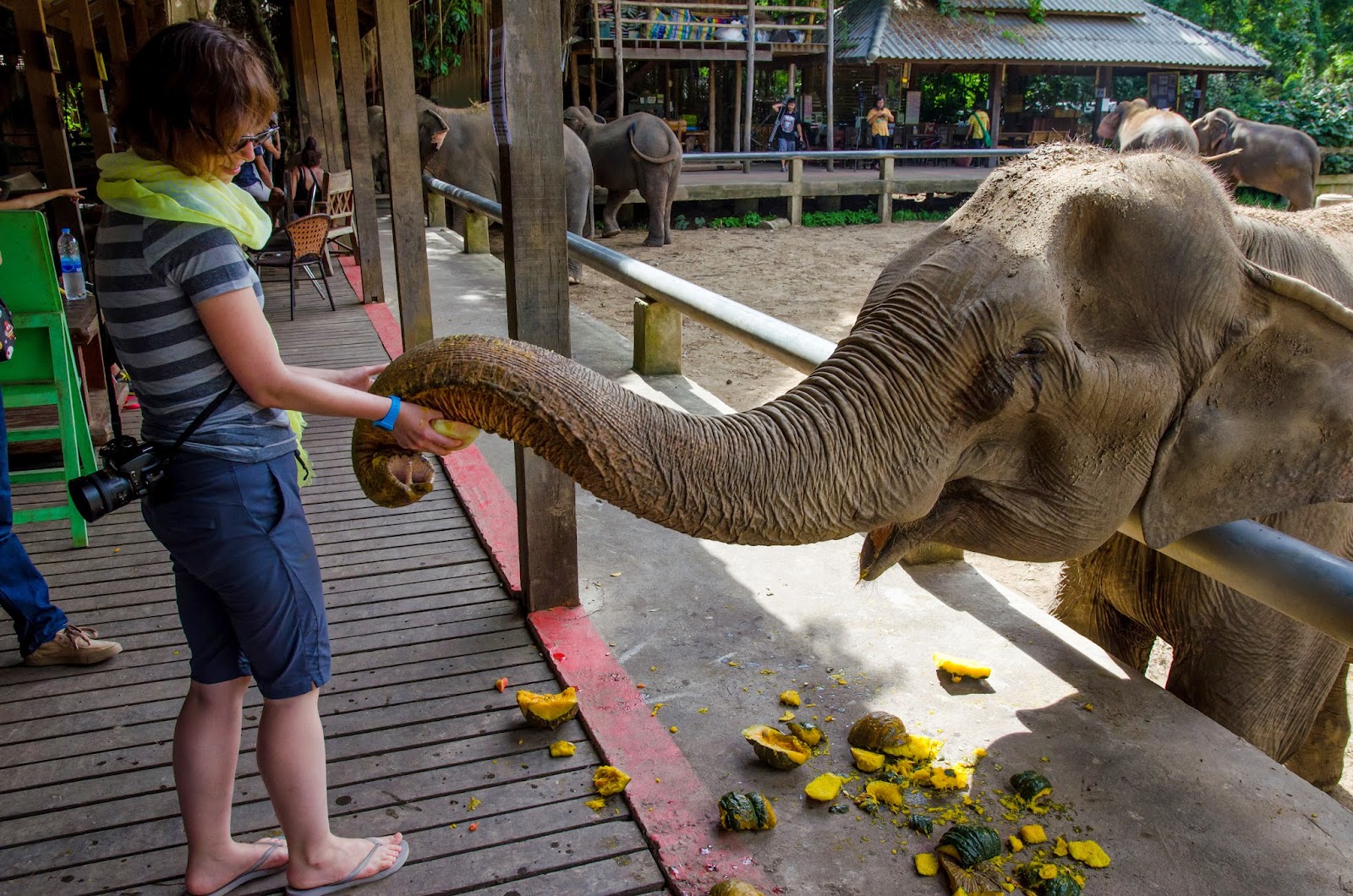 Buanham was a messy eater, and we still had pumpkin on us when we boarded the plane later that night for Phuket as we headed to the beach in search of further relaxation. 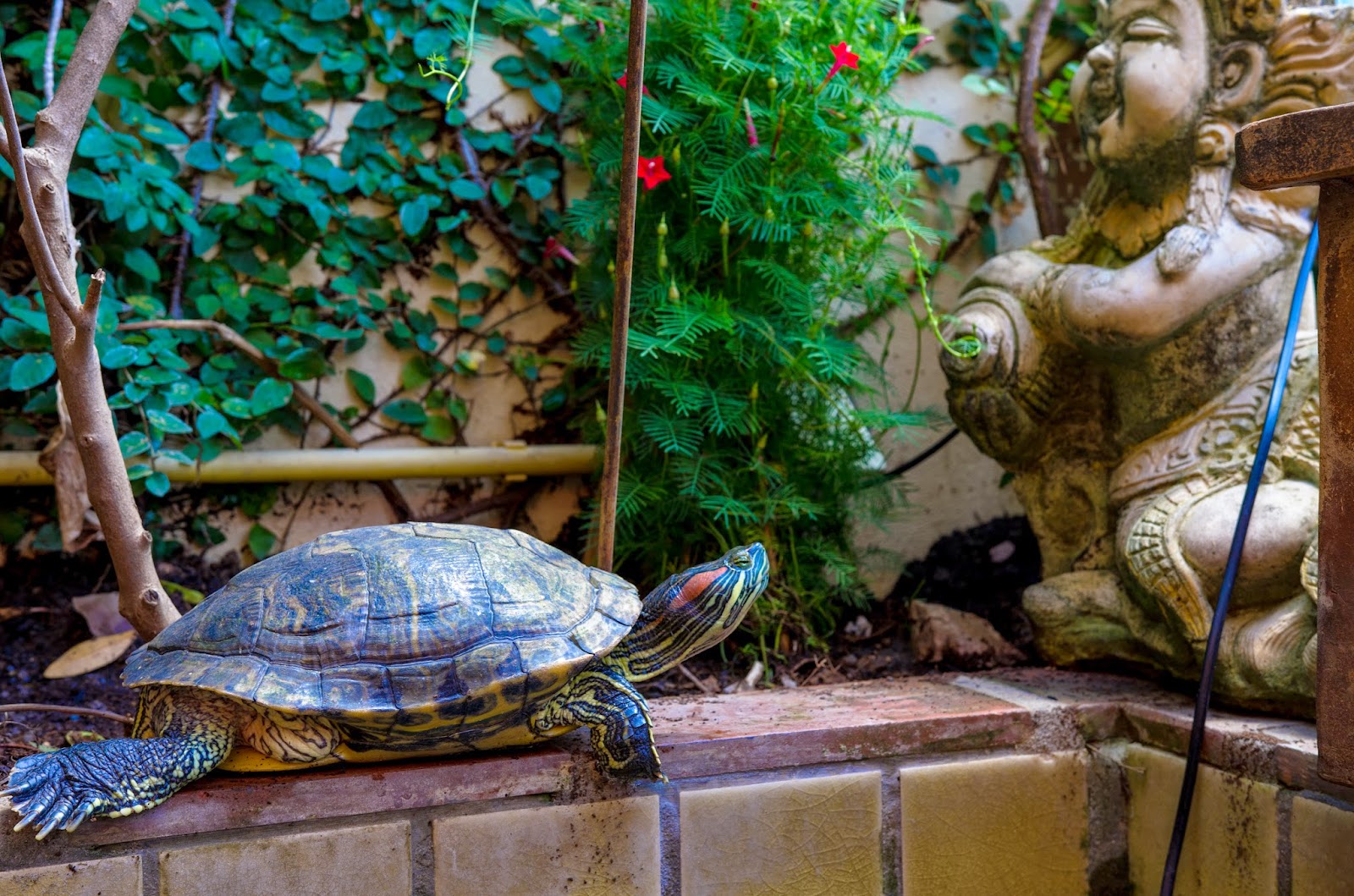