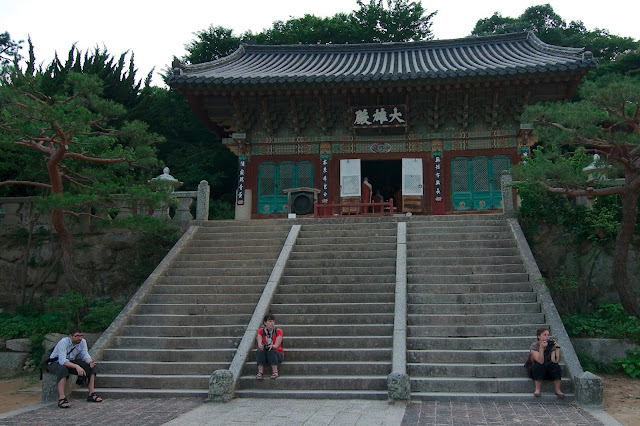 After bidding Japan sayonara, we boarded a ferry toward Busan, the second largest city in South Korea. We took several ferries during our trip, but this one was by far the most fun because it was the only one that allowed passengers outside on the deck, and when we ventured out, we were in the most violent winds we have ever experienced. It was nearly impossible to stand in one spot or to walk into the wind, and when we put our backs to it, it pushed us down the deck with so much force that we couldn't stop running until we hit the railing on the other side, which was thrilling, but a little bit scary, and made us hurry back into the safety of our cabins. 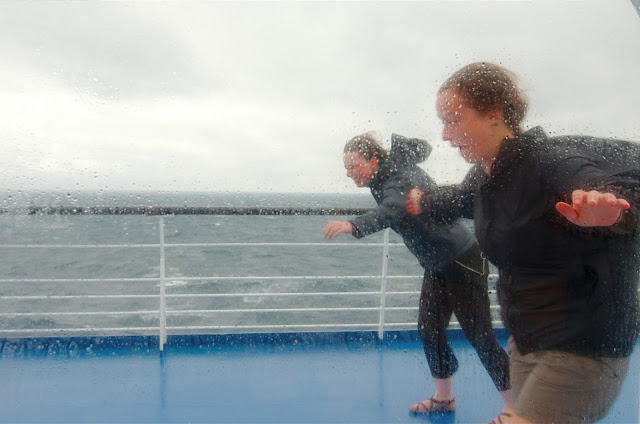 The journey from the ferry dock to our hostel immediately highlighted the differences between Japan and South Korea: crossing the street seemed daunting because of the unruly traffic and the metro machines inconveniently accepted only 1,000 won notes fed into them in a very specific manner. We realized how spoiled we had been by the user-friendliness of absolutely everything in Japan. However, we eventually made it to our hostel and after checking in we explored our new neighbourhood, which was full of hostels, clubs and general chaos. Because Busan is a large city complete with a famous beach, it is known as the party destination for young Koreans, as well as the destination of choice for American soldiers on leave (the great number of American soldiers we saw was an odd reminder of the continued American military presence in South Korea).

Finding dinner was also a bit more difficult than in Japan, as almost every restaurant featured Korean barbeque with little other than meat on the menu. Eventually we found a place that advertised noodles with vegetables, although when our order came, it arrived with a generous pile of ham on it, which we gave to Yann and Emilie. We were now ready to dig in, but we were confused by the presence of scissors on the neatly arranged plate. 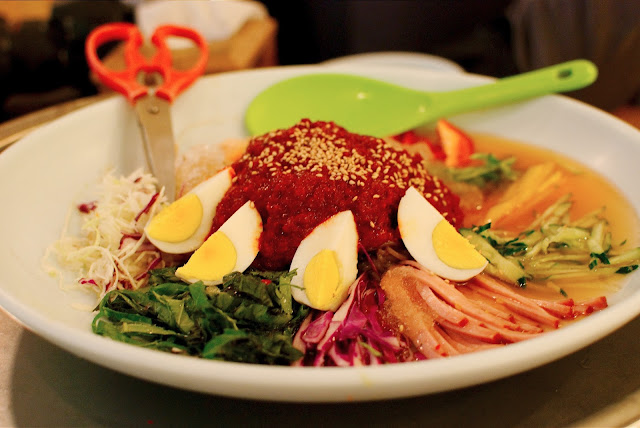 A kind server noticed our awkward attempts to serve ourselves and expertly cut up the noodles with our scissors and tossed the ingredients together for us. 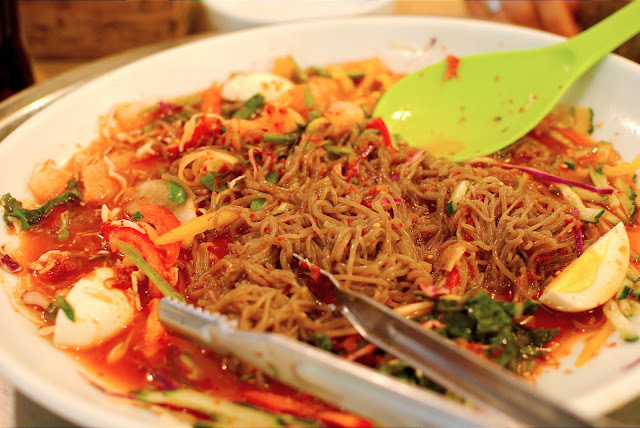 The meal was a proper introduction to the food that we would be eating for the next three weeks in Korea, as it was cold (in fact it was served with some ice on top) and smothered in red pepper paste, which was delicious, but too spicy for Antonia. 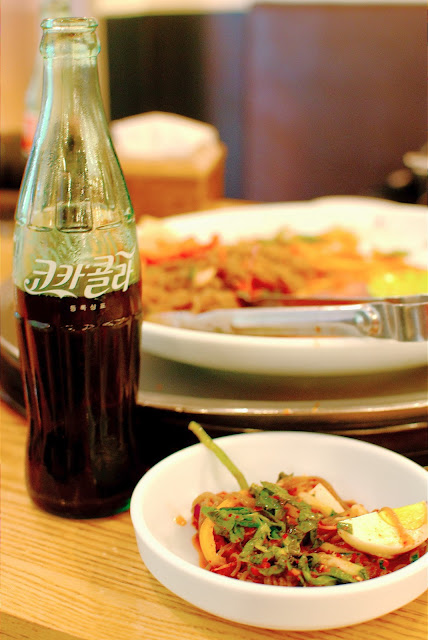 The next day we walked the short distance to beautiful Haeundae, an urban beach with a view of skyscrapers in the background and blue, mountainous islands out on the ocean. We spent a fun few hours swimming in the chilly waves and napping under a beach umbrella. 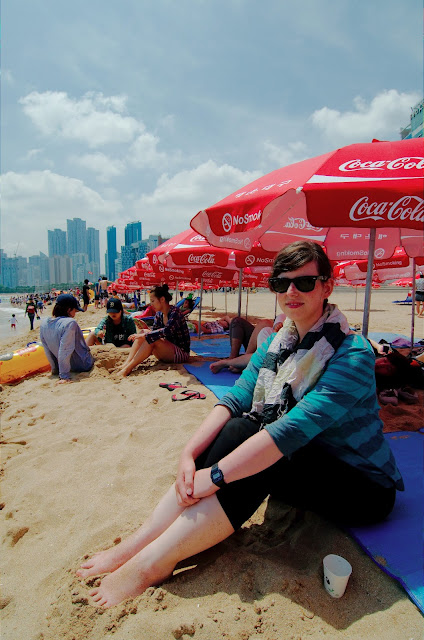 For lunch we found a Mr. Pizza chain and ate a vegetarian pizza that was topped with corn and had a very sweet sauce, and came with sweet pickles and mayo on the side.

To round out our short time in Busan and to see the city in a completely new setting, we took a metro and then a cab up a forested mountain to see Beomeosa temple. 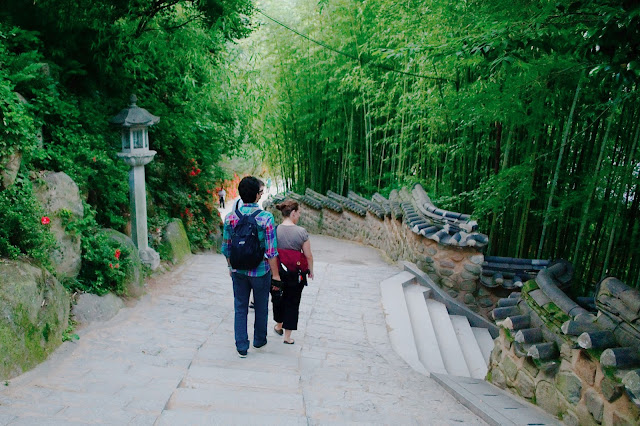 While exploring the grounds in the beautiful surroundings, we began to hear the sound of drums beckoning the monks to a prayer ceremony. 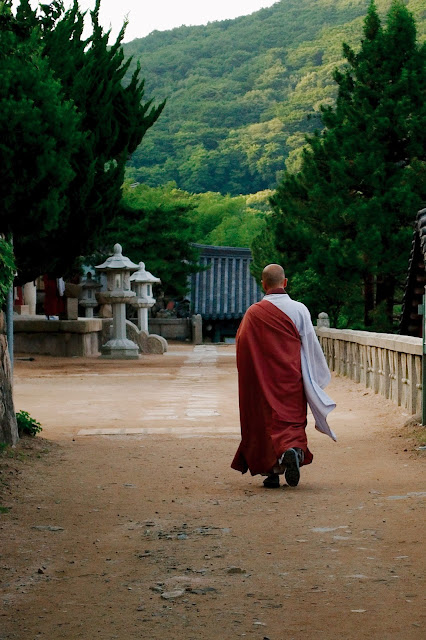 We followed the sound to an ornate open-air structure that housed the largest gong we have ever seen and we watched as monks stood around it playing various percussion instruments. 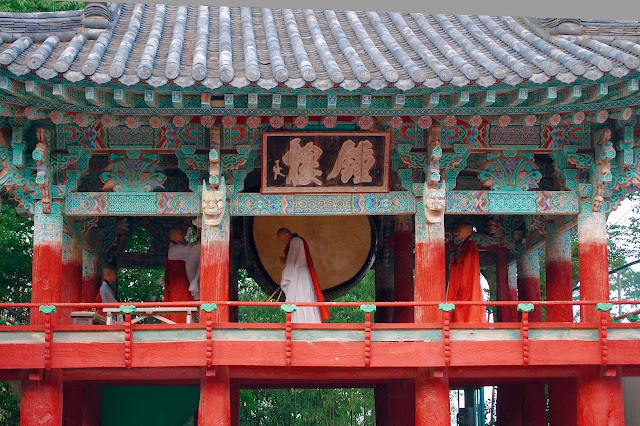 The monks then proceeded to a prayer room to commence chanting, and we sat on the steps in the large courtyard to listen. 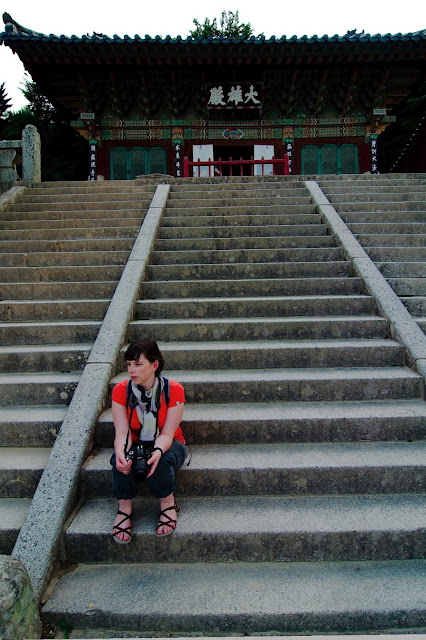 For dinner we picked up green onion pancakes (which would become Antonia’s favourite Korean food) and tempura from the bustling street market after wandering up and down the alley gazing at the various goods for sale, from knock-off bags to giant crabs that were trying to climb out of their tanks. 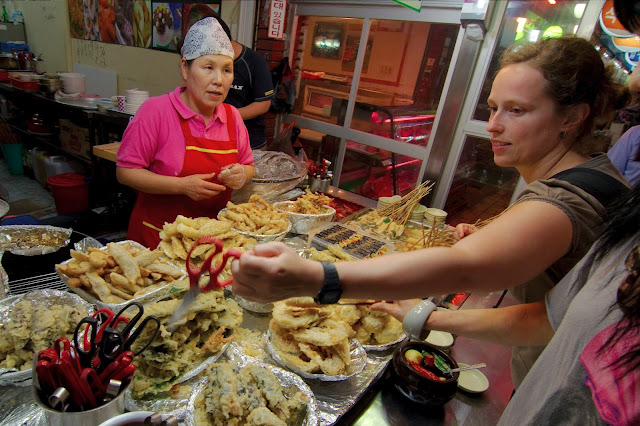