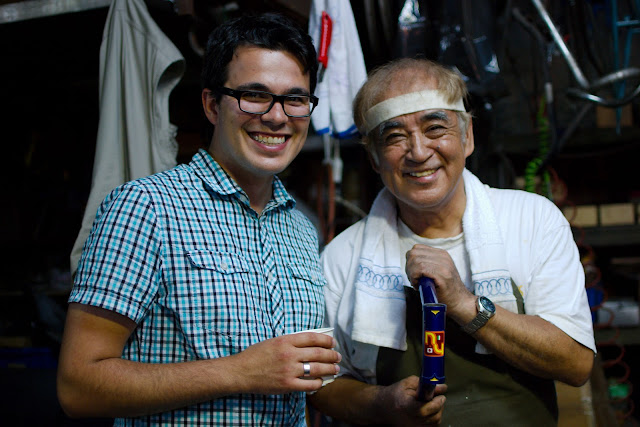 Fukuoka was our last destination in Japan, and truthfully we chose it primarily for its ferry port that would be our access to Korea. It is a large and vibrant city, though, and we used our few days there to partake in some Japanese activities that we hadn’t yet had the chance to. The first of these was pachinko – a hugely popular gambling phenomenon in Japan. Throughout our trip, we had been amazed by the sight of tall, windowless buildings full of people playing what looked liked an especially easy arcade game at all hours of the day and night. Since we were staying down the street from one of these giant complexes, we decided it was time to venture in, even though we had no idea how it worked. Walking inside was an immediate sensory overload. The building seemed silent as we approached but the automatic sliding doors opened to an overwhelming wall of noise. The beeping and ringing of the games was so loud that we wanted to cover our ears as soon as we stepped in. The machines were very bright and would blink and flash according to what was happening in each individual game. We got a very patient employee to show us how the game worked. He offered a level of help that we are sure wouldn't be allowed at a casino in Canada, putting his hand over James' and essentially playing the game for him. Nevertheless, we never really got the hang of it. Basically, players buy a set of marbles that are fed into the game and bang around as in a pinball machine. If they fall in the right place, the player has an opportunity to win a jackpot if various things happen in the correct sequence, and more marbles would be released from the machine. We played one game, and sadly our 1,000 yen ($13) melted away into the machine before we could learn much more. If we had been luckier, we could have traded in our marbles for ‘prizes’ at the counter (gambling for money is illegal in Japan), and traded in these prizes for cash at another counter around the corner. When we stepped outside while chatting to each other, we suddenly realized that we had been shouting at the top of our voices just to be heard.

The next morning we were gently awoken by a kind hostel staff member who remembered that we had mentioned an interest in taking a tour of the Asahi brewery and had found out for us that the only English tour of the day started in the morning. We quickly headed to the brewery and took our free tour. It was interesting to see the extremely efficient machine assembly line – a mere 140 employees operate the plant that produces 800 million cans per year. The best part was the 20 minutes of free beer after the tour, although we could only drink two glasses each – it was only 11:30 am after all! 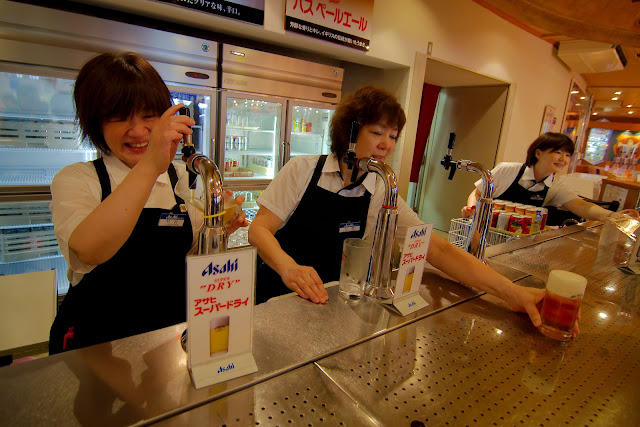 During the afternoon we prepared for a quick trip to Osaka to visit Yoshiaki Nagasawa, a master bicycle frame builder. This was an adventure that James had dreamt up and to tell the truth, Antonia was just along to make sure that he didn’t get lost on the way, but she had an unexpectedly great time owing to Nagasawa-san’s warm hospitality and the fast friendship that we made with his colleagues. Nagasawa-san does not entertain regular tours of his foreign fans, but James had read of some other tourists who had managed to get a hold of the builder and pay an impromptu visit. There were a few small things standing in our way: Osaka is about four hours away from Fukuoka by train, and Nagasawa-san works only during the night, from about 7 pm to 7 am. But we decided that this opportunity was worth missing a night’s sleep, since when else would we be this close to a master frame builder? We had the hostel staff call his workshop and we got permission to visit him that night. Preparations included finding a box of his favourite candy and taking an afternoon catnap.

Yann and Emilie chose to stay behind and leave the nighttime adventuring to us, so we boarded the Shinkansen alone and were very proud to make all of our connections and easily find Nagasawa-san’s home station on the outskirts of Osaka by about 11 pm. The difficult part was finding his workshop from there, but with some help, we eventually found the correct intersection. We didn’t have any further directions and for a few moments we were at a loss about how we would find the right building until we took a close look around and suddenly saw a beam of light in the darkness that illuminated a warehouse of countless bike parts. We entered tentatively and were greeted by Sadako and her husband René, Nagasawa-san's English-speaking colleagues whom he had asked to translate for us. René is actually an Australian with a passion for cycling who came to Japan on a trip and ended up falling in love with the country and with Sadako. They now own a cycling shop of their own and collaborate with Nagasawa-san on special projects. Antonia could see James getting ideas about the perks of such a lifestyle and begin scheming about how he might spend summers in Osaka. We were very happy to have René and Sadako with us, not only for the translation (we had previously imagined nodding politely as we stood in silence watching Nagasawa-san work all night), but because they were interesting and kind people whom we enjoyed getting to know in the wee hours of the morning. We're not sure if they had intended to stay the entire night, but they insisted, through stifled yawns, that they didn't mind. We are very grateful to them for forgoing sleep that evening since their presence made the experience much richer for us. 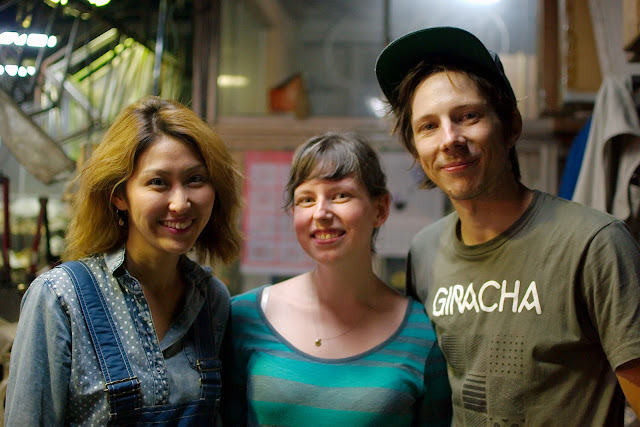 Nagasawa-san was more welcoming than we could have hoped for. He first took a coffee break to sit down with us and chat, then invited us to watch him work and didn't seem to mind being the subject of hundreds of photos throughout the night. When he found out that we weren't staying in Osaka, he even offered us a guest room at his house for the night. We did not end up making use of it, though, since we spent the wee hours happily getting to know René and Sadako, and watching the master at work. 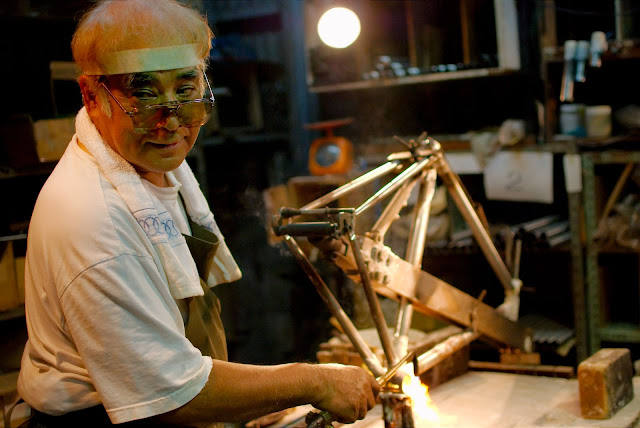 Throughout the night, we had the opportunity to get to know Nagasawa-san a bit. René and Sadako informed us that he had begun his career as a keirin racer, but he was in a bad accident and doctors forbid him from racing anymore. To remain in the keirin community, he was forced to learn other aspects of the sport, and studied massage and bike mechanics - anything to stay with his team. He realized that he should learn to build keirin frames and that if he was to do it properly, he should learn from the masters in Italy. So he showed up at the door of Ugo De Rosa without having any money or frame-building skills, and without knowing any Italian. He started by sweeping the floors of De Rosa's workshop and worked his way up to frame building in the shop, acquiring the skills that make him one of the best frame builders in the world. He eventually brought these skills back to Japan and used them to revolutionize keirin frame building. Rumour has it he also brought back his Italian sleep schedule which is why he still keeps such strange hours to this day. 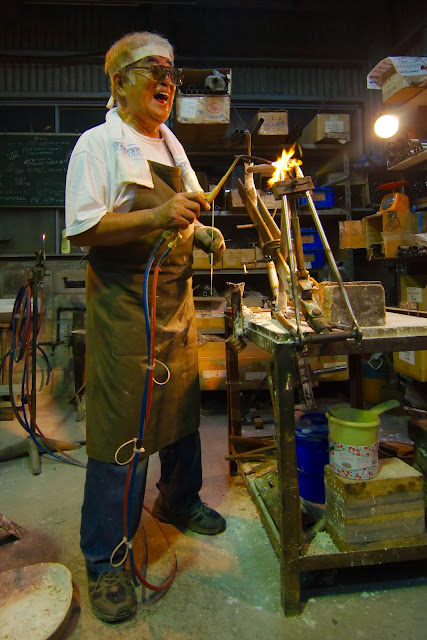 At about 4:30 am, Nagasawa-san stopped working to give us a gift of a full set of bicycle decals and part of a frame from a bicycle of his that had been damaged in a keirin race. He proceeded to pour beers all around and we toasted one of the best nights of our trip. Then, because he works such odd hours, he declared that he was hungry and that it was time for 'dinner.' He insisted on taking us all out for a meal, and René and Sadako drove us to a nearby 24-hour diner where we joined Nagasawa-san, his wife and his son for a large 5:30 am feast throughout which Nagasawa-san discussed his views on cycling, Japanese history, and life in general. It was truly a treat to spend time with such a knowledgeable and warm person. After the meal, René and Sadako kindly drove us to a train station where we started on our long way back to Fukuoka. 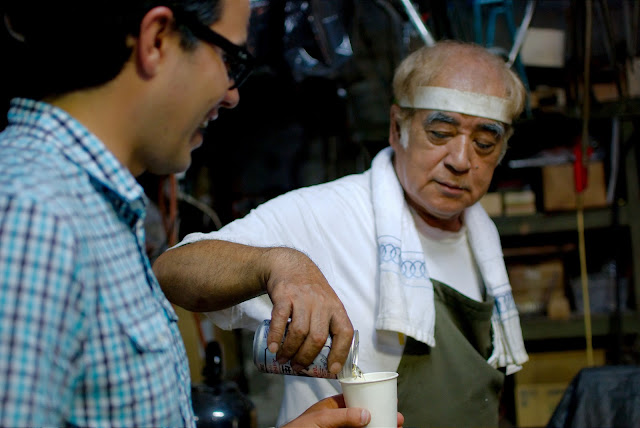 Having slept only about an hour on the train, we went to sleep as soon as we had regaled Yann and Emilie with our Osaka adventure, and only woke up in time to go the the baseball game that we had bought tickets for in our quest to experience another national pastime of Japan. Our hostel had a Fukuoka Hawks fan rulebook and we read it in preparation. It was a ridiculously detailed account of  how to behave as a fan, and outlined for example appropriate times to wave a flag: when your team scores, when your team hits a run, and when your team is ahead by a large margin. Only in Japan would spectating be so heavily regulated. The Japanese certainly take cheering seriously - the audience stood the whole time the Hawks were at bat. 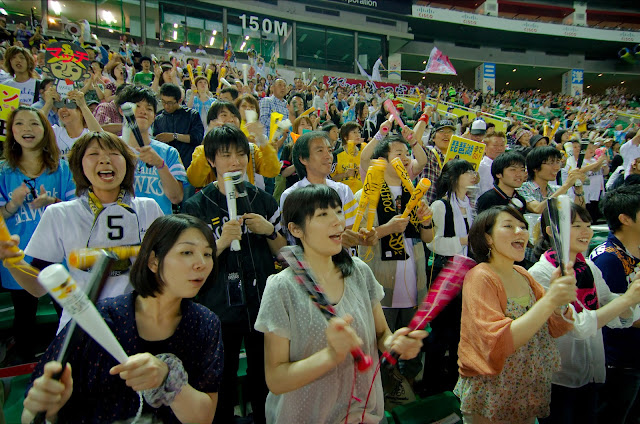 A live band and a very enthusiastic man with a megaphone led the crowd in cheers that everyone knew, complete with particular dances to go along. 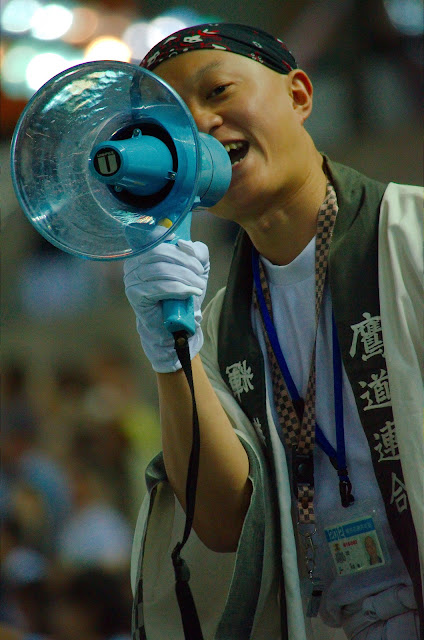 When flag-waving cheerleaders came onto the field between innings, a businessman in his suit took out his matching flags and moved into the aisle to perform the entire routine with them, spot-on and full of energy. When the routine was over, he carefully rolled his flags up and sat back down, smoothing any creases in his pantsuit. The baseball game was lots of fun and a great opportunity to witness for one last time the adorable mix of seriousness and playfulness in the Japanese culture. 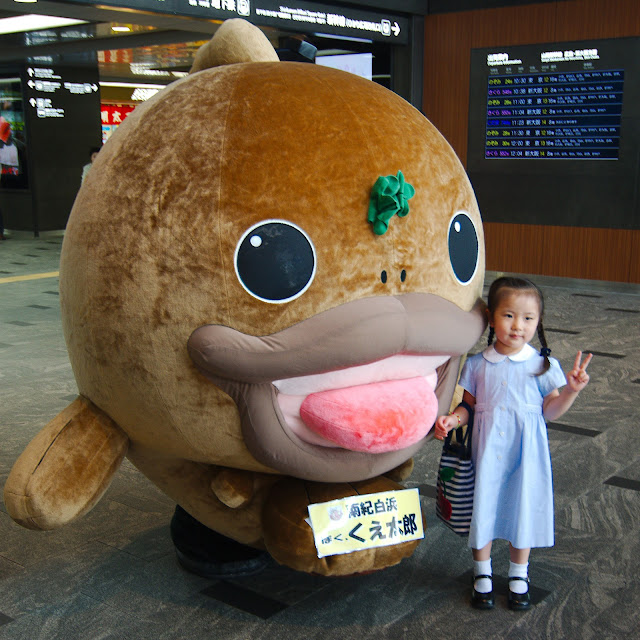