Here is a short video of some of our adventures in South Korea.

Posted by James and Antonia at 1:54 PM No comments: 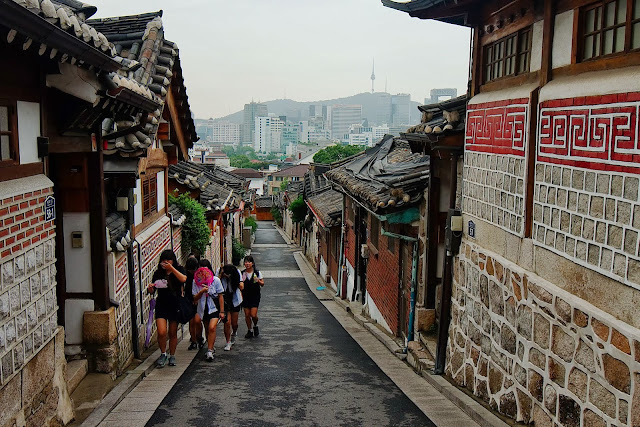 Before we left Seoul, we took the opportunity to join a tour of the Demilitarized Zone (DMZ). Our tour bus first stopped at the Monument to the Philippine Armed Forces, which honours the large contingent of Filipino forces who participated in the Korean War. 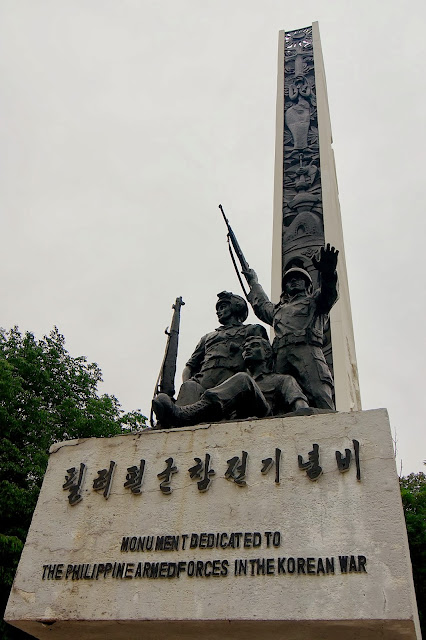 We then stopped at Unification Park where we were given time to visit more monuments to fallen soldiers, including ten South Korean suicide bombers referred to in inscriptions as brave 'human bombs'. The inscriptions also expressed the wish that the military spirit of the 'human bombs' live on in the South Korean people. As unification between North and South Korea is the stated purpose of the park, we weren't sure how helpful those sentiments were in forwarding that ideal. 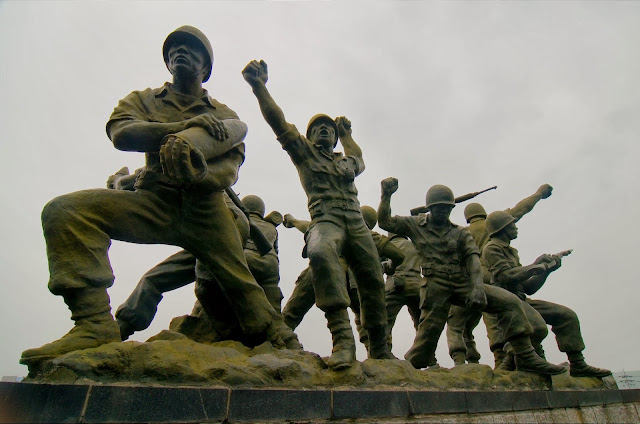 Closer to the border is Imjingak, the site of a park built to help console families who were split during the war. People gather here every New Year's Day to grieve for their friends and family on the other side and hope for eventual unification. We saw the Freedom Bridge and the Liberty Bell before being rushed back onto the bus by our tour guide. 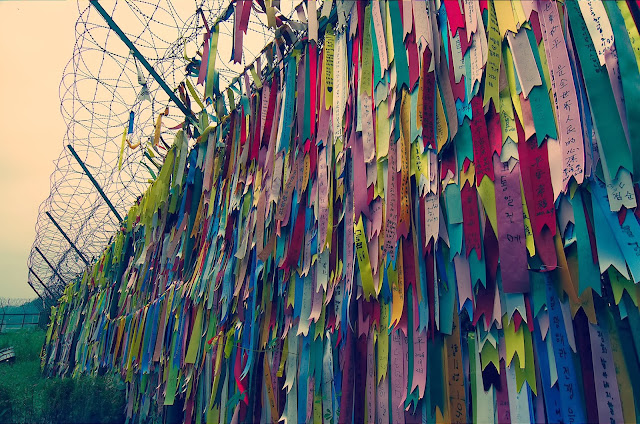 The final stop was the one that everyone was waiting for - we drove towards the DMZ and then into the Joint Security Area (JSA) where South and North Korean forces are locked in a continual face off and where negotiations between the United Nations and North Korea took place until they broke off in 1991. On the way, the bus passed through a few military checkpoints and we began to see armed guards and barbed wire lining the road beside signage indicating live mine fields. We also passed a training ground with a model of the JSA buildings designed to help soldiers run realistic drills.

When we got to the JSA buildings, our tour guide left us in the care of an American soldier who would be our escort for the duration of the tour. We were given United Nations badges to wear and led inside a room where we signed away our rights and our expectation to life. We were then shown a slideshow on the history of the JSA and what we could expect to see when we got outside near the military personnel. Perhaps we shouldn't have been surprised, but we couldn't help but note the bias apparent throughout the presentation. The closest South Korean village to the border is called "Freedom Village" while the North Korean village facing it is dubbed "Propaganda Village." The presentation also emphasized how hard the South Korean government had been working toward closer relations, while the communist regime in the North just keeps alienating itself.

After the briefing, we piled into a UN bus that took us to the actual line of demarcation between the two countries. The historical significance of the area, the tension emanating from the South Korean and American soldiers, and the big guns everywhere gave us an uneasy feeling.

The South Korean soldiers assume a perpetual Taekwondo "ready" pose while they stare intently at the North side. 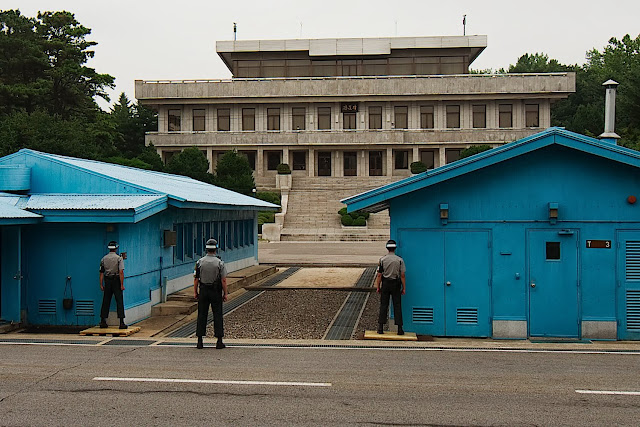 The American soldier was busy barking orders and instilling fear in us. We had to walk in single file at all times and stay in a straight line, and refrain from waving or pointing. The instructions that we received before the tour had also directed us to wear long pants, no sunglasses or hats, and no sandals - presumably in case we had to run somewhere. The American's attitude towards us was so brash that it implied that any transgression on our part could set off another war, which made us wonder, why allow tourists in at all if relations are actually that touchy? As for the infamous North Korean soldiers, we only saw one, standing casually on the steps of his building and observing us through binoculars. Our American soldier brought our attention to mounted cameras that he said the North was using to monitor us.

We then entered the Military Armistice Commission building that straddles both sides of the border. We took pictures with an unsmiling South Korean soldier after we were warned not to touch him or move in front of him. 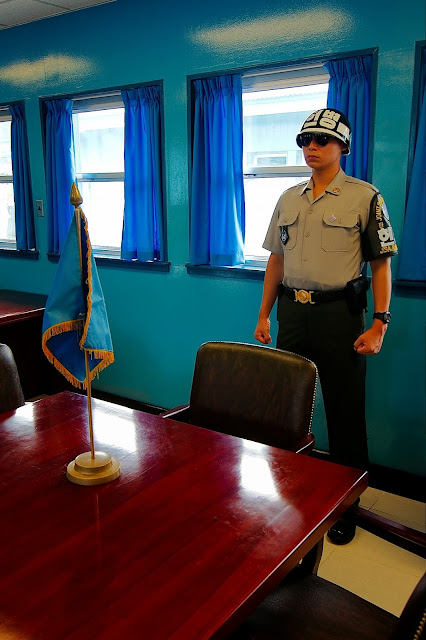 To round out the intense and intensely strange tourist experience on our way out of the JSA, our bus drove past the location of the 1976 axe murder of two American soldiers. Before this incident, both sides shared all of the JSA and worked among each other. But some discussion arose around a tree that was blocking the view of an American observation post. The Americans wanted to prune it and the North Koreans rejected this idea. The Americans then decided to chop down the entire tree as a show of force in a plan they called Operation Paul Bunyan. In response, North Korean soldiers took the the axes being used by the Americans and killed two of them.


After being dropped off back in Seoul, we left Yann and Emilie and headed to pick up James' camera lens, and then decided to try an Italian restaurant in Dongdaemun Market. We ordered baked spaghetti and garlic bread. The spaghetti was very good, but it seemed like our waiter had forgotten about the garlic bread. When we asked about it, he seemed surprised: "Oh really, you want the garlic bread right now?!"After we convinced him that indeed we did, he brought it...with a side of whipped cream. And sliced almonds on top. But it was also very garlicky and had parmesan cheese on top. 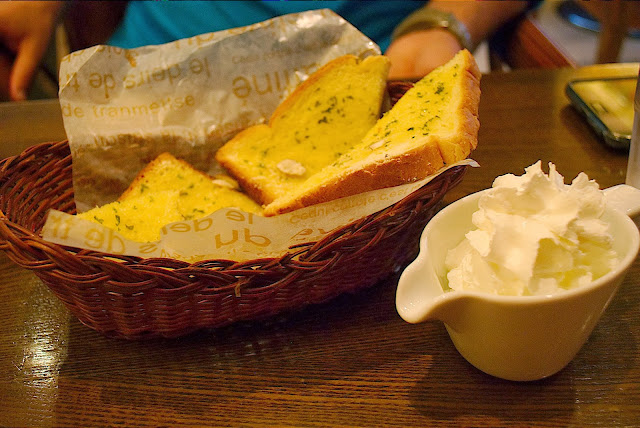 Yet upon further investigation, it actually tasted quite sweet. We tried to ask the waiter if it was a dessert, but the language barrier was too great. He was only able to confirm that the whipped cream was indeed meant as a dip for the bread. It was one of the weirdest culinary experiences of our trip, but edible once we piled on the whipped cream and tried to think 'dessert.' 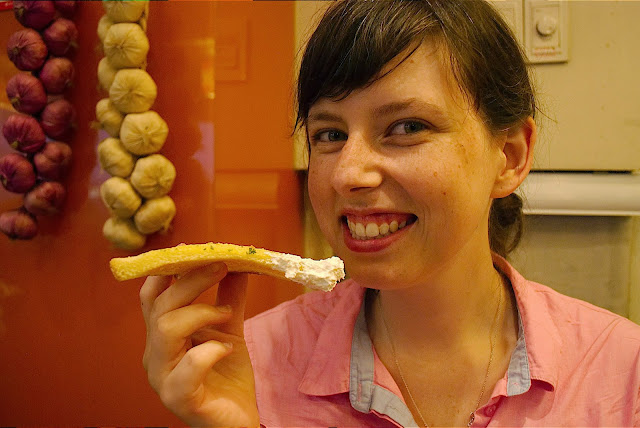 Side note: one strange culinary experience that we were not able to taste as vegetarians was a hot dog deep fried inside of French fries, a popular street treat in the Dongdaemun market. But of course Yann, our intrepid culinary adventurer, tried it, and seemed to approve. 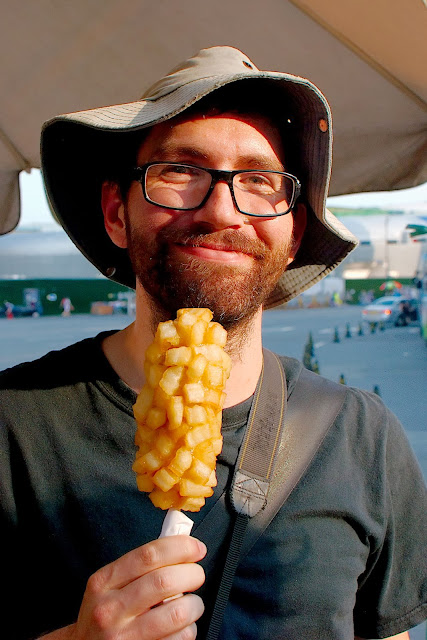 After our garlicky dessert, we did some shopping in the market before going back to the hostel, but while everyone was getting ready for bed, James decided to go back to the market to buy sunglasses. Since Antonia had no desire to go back out into the melee, he told her to go to bed and that he would be back soon. But she thought that she had better stay awake to make sure that he got home safely, and an hour and a half later, she was worried enough that she was about to wake Yann and Emilie and organize a search party. Luckily, James returned just before she did that and apologized for letting his inner bargain hunter run wild on the streets of Seoul in the wee hours.


We began our last day in Seoul with a walk through the traditional Bukchon Hanok Village, a 600-year-old neighbourhood around the palace complexes. Picturesque narrow alleys are lined with homes built in the traditional Korean style. 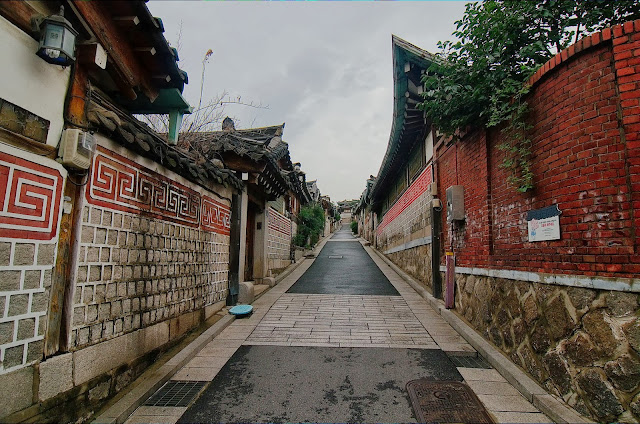 The area was designed to accommodate government officials and nobility during the Joseon dynasty. It would have provided them easy access to the royal court as it is located between the primary palaces, and according to traditional Korean architecture, rooms were placed in relation to the surrounding landscape with floors heated by a rock system (ondol) to battle the cold winters - an invention unique to Korea. 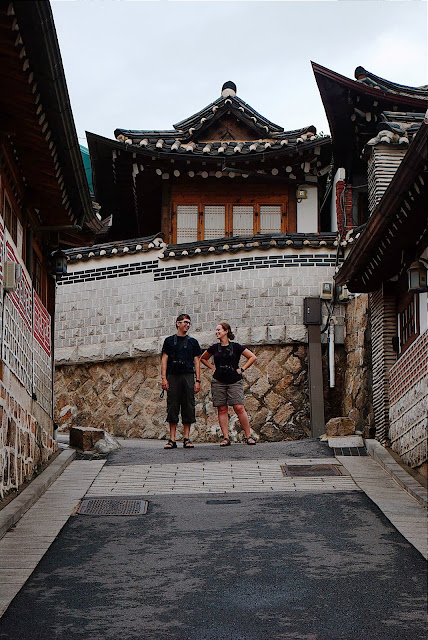 From there, it was a short walk to Gyeongbokgung, Seoul's main palace complex, where we were just in time to see the changing of the guard. We gathered to watch at the gate that would have been the entry to the chamber where the king ruled the country. The ceremony has taken place since 1469, and the present-day interpretation is supposed to be very close to the original. 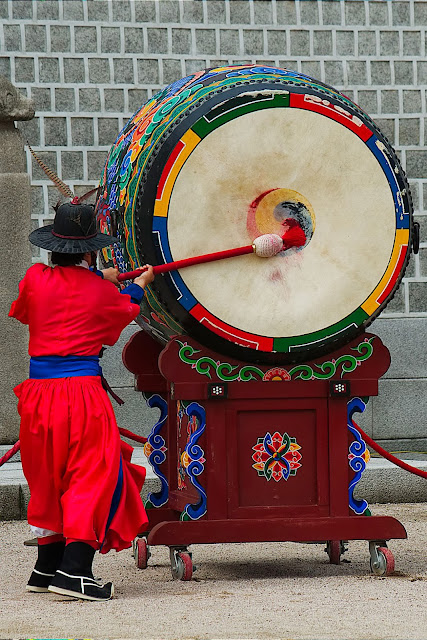 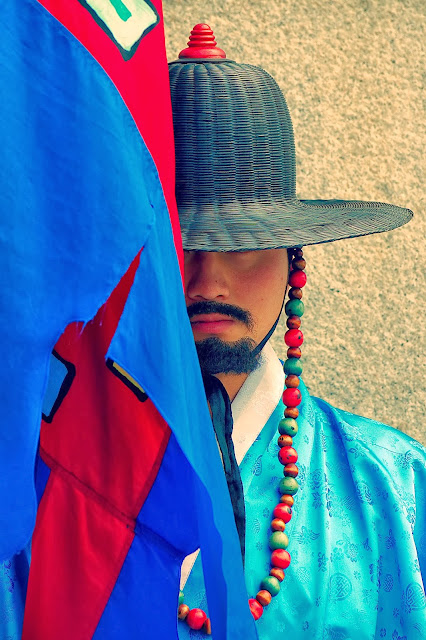 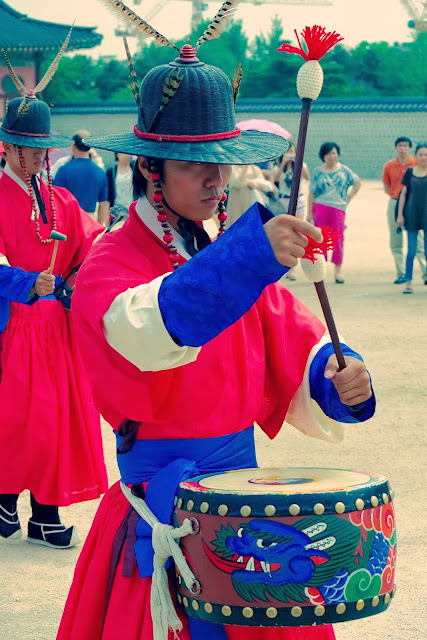 As everyone else had one last afternoon to spend at the math conference, Antonia parted ways with them and took the metro to the National Museum of Korea. She had a lovely afternoon exploring the modern, light-filled building filled with art and artefacts spanning all of human history on the Korean peninsula. 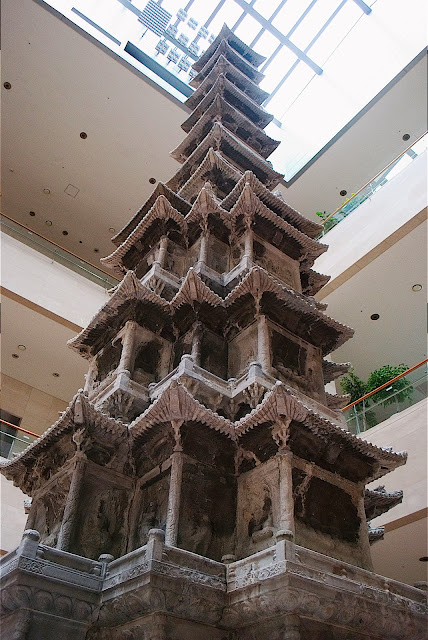 Among her favourites were two pots from the third century crafted to look like cartoonish ducks. 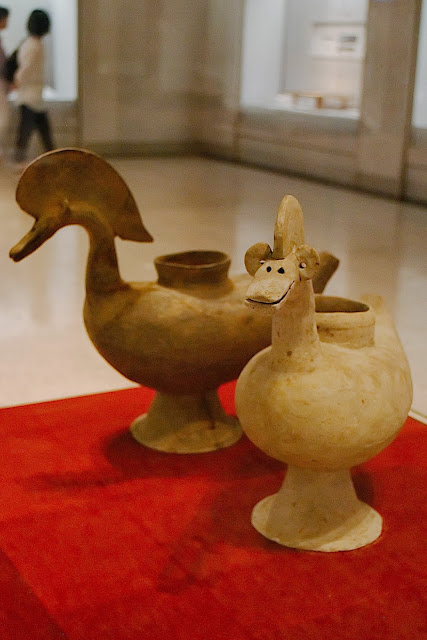 Antonia met up with everyone after the conference, and we ate at a Mr. Pizza in the COEX mall to celebrate our last night night in South Korea and what would be our last night together for a couple of weeks.


We then took the metro back to the e-Sports staduim where we had watched League of Legends because we had read online that there might be some breakdancing going on, but alas, we weren't able to find any. Luckily, though, the stadium happened to be right next to one of the most famous spas in Seoul. We had heard that a visit to a Korean spa was not to be missed, and especially that we should receive an exfoliating scrub, usually performed by elderly ladies who enthusiastically rub off a whole layer of skin. Despite this tempting opportunity, the boys chickened out and opted to go home and start packing, but Emilie and Antonia decided to be adventurous and complete the South Korean experience; and they were so glad that they did! The Dragonhill Spa is seven stories of pools, spa, amusement parks, and arcades. Emilie and Antonia opted to stay in the women's spa area, but there was plenty of fun to be had there. The spa room had dozens of different pools displaying their particular temperatures and medicinal properties. There was also a section for spa services, with a long list of possible treatments, including every type of massage and scrub.


The girls headed straight for the scrub that they had heard so much about. The area for spa treatments comprised a row of vinyl, cushioned beds with elderly ladies in matching underwear tending to the row of nude women on the beds. Emilie and Antonia took their places in the row, and proceeded to be vigorously scrubbed by sandpapery equipment that took off an amazing amount of skin. Since the scrubbing ladies didn't speak English, they would give a swift little swat on the bum to indicate that it was time to turn over. Then after a couple of rounds of scrubbing, without any warning, there was a sudden dousing of water. Next came a thorough washing with soap, making the girls extremely slippery on the vinyl beds, and afraid that they would fly off and land head first on the tiled floor. After more rinsing came the shampooing, and then after a few sharp shiatsu punches, they were refreshed and ready to go, feeling cleaner than they had ever been.


They then took the opportunity to try some of the different pools. They were convinced by an American mother and daughter, who seemed to be experts on the matter, to try the cold bath, which was 19 degrees Celsius. It was very painful to go in after walking around such a warm and steamy room, and it was even worse to press the button that prompted a strong waterfall of icy water to come rushing over their  heads. However, it was extremely refreshing and they felt great afterward. They then did a tour of the warm herbal pools and read the long lists of benefits touted for each one: anti-aging, blood pressure regulation, weight loss, digestion benefits, etc. They also lay on some warm jade slabs to incur some similar benefits, and ended the evening with another rude awakening in the cold bath - the perfect preparation for the Chinese leg of our journey, which would start early the next morning. 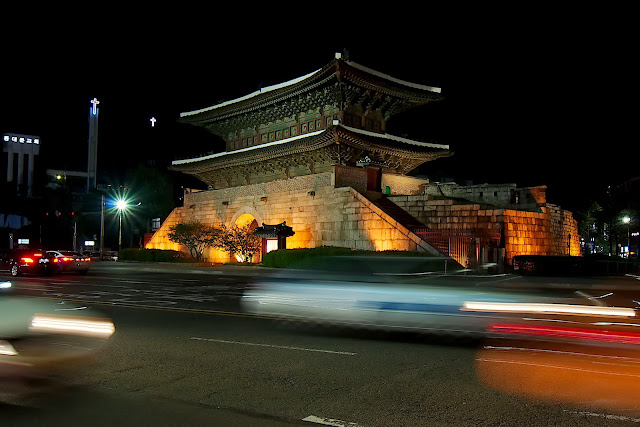