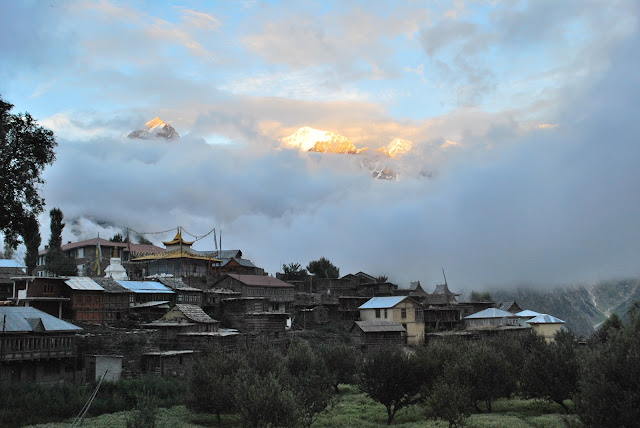 Once at the bottom of the mountain from Dhankar, we waited on the highway for the bus. Soon we hailed down a van, which luckily happened to be driven by a monk who belonged to the monastery at our next destination. He graciously offered to take us with him and we clamboured into the back of the van for the ride toward Tabo.

At Tabo we checked into the monastery guesthouse. Being very tired and hungry from all of the climbing that we had done over the last couple of days, we were looking forward to a rest, but it was not to be. The Buddhist museum in the monastery was about to close and not reopen until after our departure. So, we stumbled through the rare and beautiful artefacts, hoping that our bleary eyes were registering something for posterity.

The next morning we woke up at 5:30 am for puja. Tabo's was a disappointment after coming from Dhankar. There were more tourists in attendance than monks, and the monks did not seem to have the same gusto in their chanting. In both puja ceremonies, though, our favourite part was picking out the monks who were fast asleep. They would wake up after awhile with a big yawn that was incorporated as inconspicuously as possible into the ongoing chant.

After a breakfast of thick and filling Tibetan bread, we explored the dark rooms of the Tabo gompa using our headlamps. Established in 996 A.D., it houses some of the finest Indo-Tibetan art in the world and is protected by UNESCO. The several temples that we visited in the complex were indeed very beautiful, with thousand year old paintings illuminating the walls that are now warped from the passage of time. The main temple is full of large statues of Buddha, gods and demons, which form a massive three-dimensional mandala. 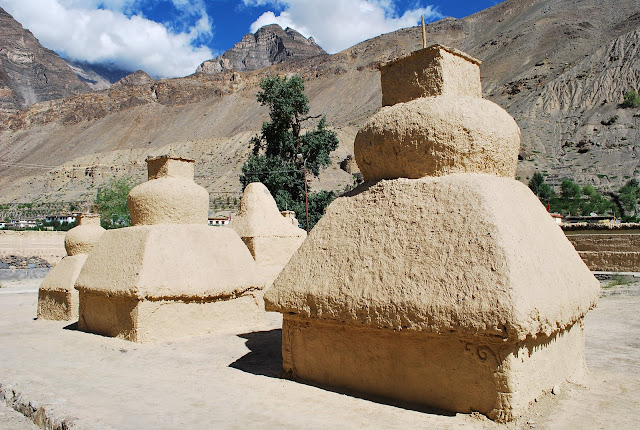 That afternoon we left for the village of Nako, which turned out to be the most beautiful village we visited on the whole trip. Small and nestled on top of a large valley, its narrow, winding streets were filled with as much Buddhist imagery as could possibly fit into the little town. Prayer flags adorned every stone entryway and villagers stopped every few steps to turn makeshift prayer wheels fashioned from wood, leather and old paint cans. We had to always make sure that we were veering left on the road so that we were properly honouring the mani walls that sprung up wherever there was enough space. These are walls made of flat stones engraved with prayers and piled on top of each other. Walking a complete circuit clockwise - half on your way to work, for example, and the other way back - is the equivalent of saying each prayer in the mani wall. 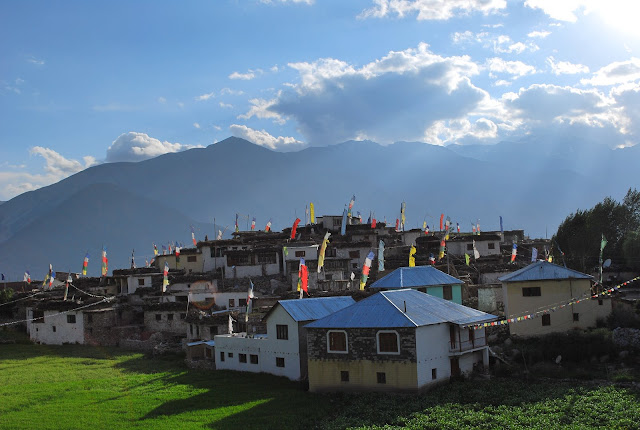 We took a short hike up the dry and dusty mountain above Nako to view the town from afar, and to visit the various prayer flags and stupas that are scattered above it. Here we saw the longest mani wall that we have ever seen, and it was wonderful to explore these monuments by ourselves on the rugged terrain. Archways hiding intricate murals and stone stupas with nothing around them but arid land seemed to exist just in case a wandering soul happened upon them in need of a spiritual respite.


We then caught another scary bus, this one with a driver who never honked as he was going around blind turns on the edges of cliffs, despite numerous signs urging him to do so. Several times we broke sharply when he was surprised by another vehicle at the last moment. We wound our way down to around 2,000 metres. Although we were now much lower than we had been for the past week, the scenery was perhaps even more beautiful because of the vegetation that could flourish, and the clouds that were caught up in the trees, beneath the peaks. We found our way to Kalpa, a small town of slate-roof houses in the midst of the lush blue and green mountains, snow-capped peaks, and clouds.

We explored the village and its main temple, which boasted beautiful wood carvings and lots of depictions of animals in kama sutra positions (!!!), set against the mountain backdrop. When the rain started we huddled into a small tea shop for some of the best chai of our entire trip, and watched some toddler boys - without any apparent adult supervision for the day - play in the rain. 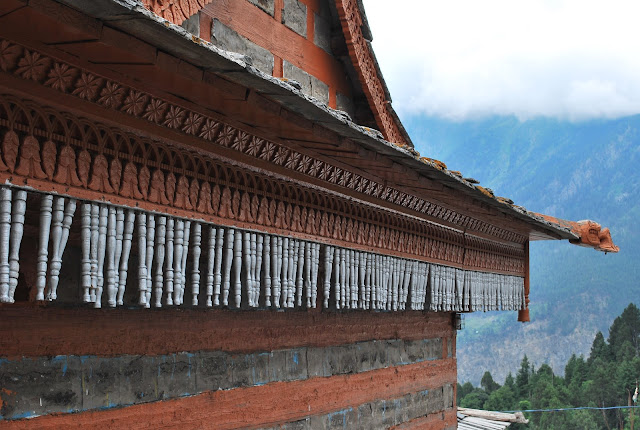 That afternoon we felt like playing cards in our hotel room, but decided that we needed to be good travelers, taking every advantage to explore and experience. We decided to catch a bus that went up the mountain to another small town. We knew that we would have to walk back down, but we had been told that it was a nice hour-long hike downhill. So, we waved down a bus heading up and settled in for another periless ride winding up the mountainside. This turned out to be one of the more unsettling rides we experienced, with gravel roads as narrow as the bus being the only thing to protect us from plummetting straight down for miles. There seemed to be no place to 'hike' down other than this road, and we were all silently sizing up how we would walk back. When the bus made it to the summit we all looked at each other and understood what we had each been thinking: there is no way we're getting off this bus and walking down this road. The bus driver and conductor thought it was hilarious when the foreigners paid for another ride right back down without even getting off the bus, and we couldn't believe that we had chosen to take this dangerous ride without even having seen anything at our destination.

That night we were having dinner when all of a sudden we spotted a large procession making its way through the village streets. We left our meals and ran after the throngs of people playing music and carrying huge images of deities through the village toward the temple. We learned that this was a celebration in honour of the gods that are said to protect Kalpa. We also quickly learned that it was an occasion marked by the consumption of large quantities of apple wine, the local specialty. We followed the procession into the temple courtyard where we were offered 'apple juice' poured liberally out of teapots. It was apparent from the behaviour of some of the men that the party had been going on for quite some time, so we declined the invitation to join in the fun and headed home.

Our next destination was the town of Sarahan, renowned for its ancient Bhimakali temple. This large temple is devoted to Kali, goddess of destruction, and for that reason it was the site of ritual human sacrifices until the 18th century, and remains the location of occasional animal sacrifices. 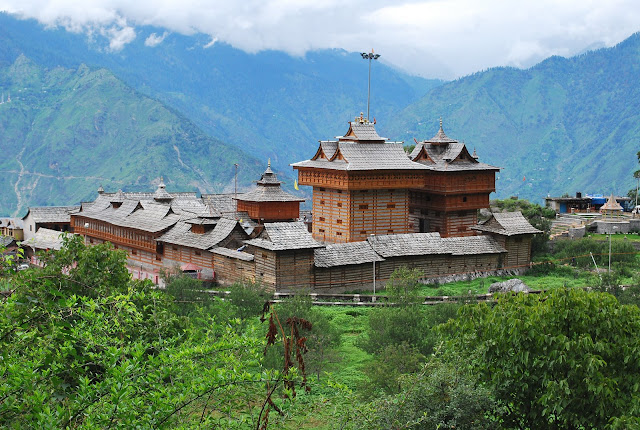 We stayed in the temple guesthouse, which overlooked the platform reserved for human sacrifice. The temple was very beautiful, and of course set amongst gorgeous, lush mountains, but it had some of the most interesting and portentous imagery we have seen. The Hindu gods that we have become familiar with, usually in serene poses and with contented expressions, were depicted ferociously crushing animals and ripping humans apart. 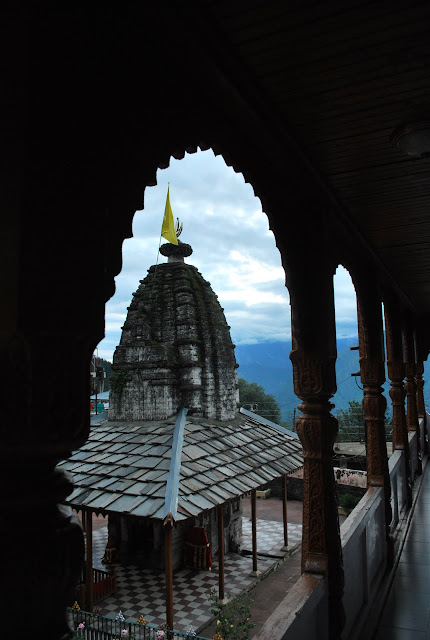 We used our day to explore the temple and walk around the surrounding apple orchards. During this walk Antonia found not one but two four-leaved clovers. Sarahan also had some of the most delicious food. We enjoyed samosas, pakoras and sweets for lunch at a cute little chaat shop, and this Tibetan soup for dinner was divine and cost less than a dollar: 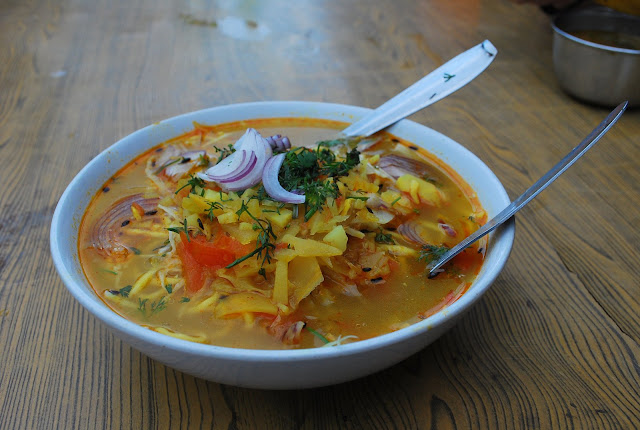 This cow also seemed to be enjoying a delicious dinner when we came across him in Nako: 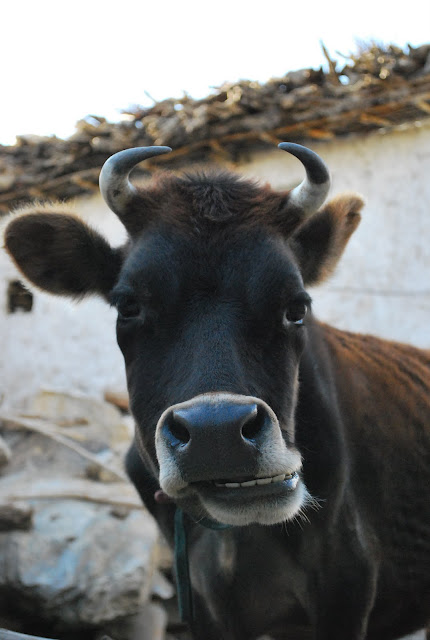 Posted by James and Antonia at 9:09 AM