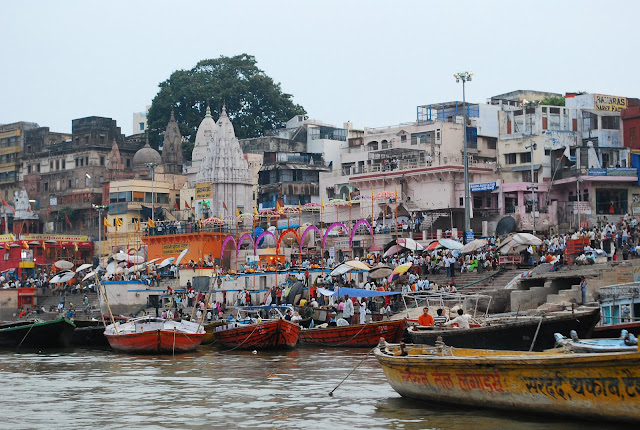 Four days ago we arrived in Varanasi for the next leg of our trip as backpackers instead of adopted family members. We have parted ways for now with Yann and Emilie, who have seen all of the very touristy sights that we have yet to see, and will wait for us up north in the Himalayas.

Before we left Kanpur, we went out with nearly everyone from both Lucie and Jitendra's families to see a Bollywood film called Kambakkht Ishq, or 'Bloody Love.' It was a lot of fun but the plot was (perhaps luckily) so transparent that we could follow it despite the fact that it was in Hindi with no English subtitles. There was a lot of good music and dancing in it. After the movie we all went for freshly made ice cream with spices and nuts, a Kanpur specialty.


The next day was spent at Jitendra's parents house before we headed for the train station. We went to get fresh jalebis - fermented dough deep fried and soaked in syrup - from a cart on the corner. They are basically just crystallized sugar. We ate these with sour yoghurt and it was one of the most delicious things we have tasted so far. Leaving Kanpur was a tearful event, and promises were made to meet again as soon as possible. We have grown very close to the family and from now on we won't think of going anywhere near Asia without a long visit in Kanpur.

We arrived at the Varanasi train station early in the morning. Four hours later we were ready to leave the train station finally having booked the trains for the next two legs of our trip. After finding a guesthouse and having a quick nap, we set out to explore one of the most holy of Hindu cities. Located at the confluence of the Ganges, Assi and Varuna rivers, Varanasi is a major destination for Hindu pilgrims. Dying here guarantees a release from the suffering of reincarnation and a direct ticket to nirvana, no matter how you have lived your life.

First we headed to the old part of the city, which is lined by hundreds of twisting alleyways too narrow for anything but pedestrian or bovine traffic. After getting turned around many times, we finally found the Vishwanath temple, plated in gold and dedicated to lord Shiva. Being non-Hindus, we could only gaze at the temple domes from across the street but they were indeed very golden, and also featured monkeys climbing on the peaks.

Next we headed toward the Ganges, and the multitude of ghats that line it. Although we had planned to walk, we were accosted by boat owners offering to take us out on the Ganges for sunset. Not having planned to take a boat gave us great bargaining power and we ended up going for a tour of the ghats on the sacred river. Our first stop was Manikarnika, the most revered burning ghat. While most ghats are set up for bathing, this one is used for cremation. We got a fascinating tour of the funerary process from an employee, who was happy to enlighten us. He told us that people visit the ghat to learn about death, but end up learning about life. "Remember," he said "burning is learning. Cremation is education."


What we learned was that it takes about three hours to burn a body, and that the last thing to go in men is their chest bone, while in women it's the hip bones. These are removed from the ashes and thrown into the Ganges intact. We saw a few bodies burning and we think we will always remember the image, despite the fact that pictures were prohibited. Ashes are poured right into the Ganges beside garbage, sewage and debris, and beside hundreds of people bathing, swimming, praying, and doing laundry. The Ganges is amazing - so intimately related to every special and daily moment in peoples' lives, at once so sacred and so dirty.


We ended the night watching the nightly aarti ceremony from our boat, in which Brahman students of Sanskrit honour the Ganges with ritual uses of fire, incense, bells and rose petals. We hadn't gotten enough of the river and its ghats, and the next morning we rose before dawn to get back on our boat. Although there was no spectacular sunrise, we watched the ghats come alive with daylight, and the city's people wake up to bathe and pray. (Here you see James rowing Antonia on the Ganges at sunset. James thinks he should have gotten a discount for doing some of the rowing.) 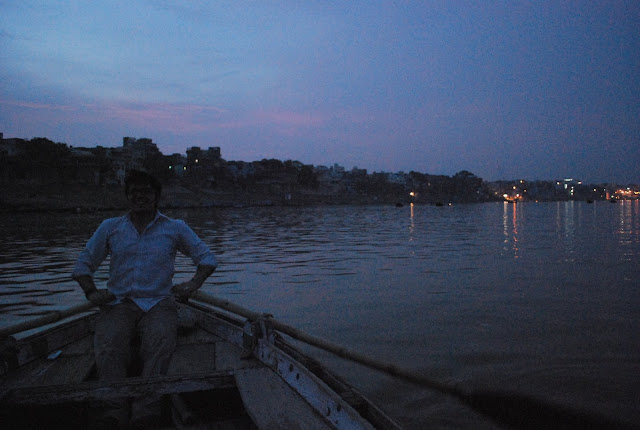 Then we headed slightly outside of Varanasi to visit Sarnath, one of the holiest Buddhist sites in the world. Buddha is thought to have given his very first sermon on this spot, and there are many temples, ruins and a museum dedicated to this moment and to the Indian Buddhist community that it inspired. There is even a bodhi tree here that has descended from the actual bodhi tree in Sri Lanka under which Buddha received enlightenment. Having been interested in bodhi trees and their mythology since her trip to Thailand, Antonia was quite excited about this. The architectural museum was also excellent, and we enjoyed a very peaceful afternoon in Sarnath. 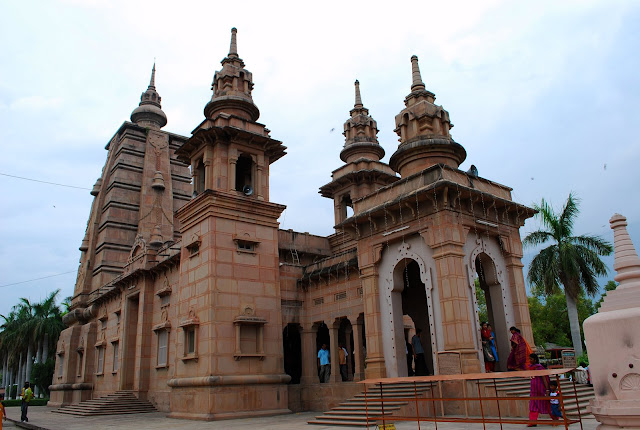 Before leaving Varanasi we had one last opportunity to walk along the ghats on the banks of the Ganges. The afternoon is a down time for river rituals, so it was nearly quiet and peaceful by Indian standards (meaning that we were only asked five or six times to visit some silk shop, by friendly people who took 'no' for an answer; only nudged off the sidewalk twice by herds of water buffalo heading for the river). Slowly soaking in the temples and the scenery on that afternoon was one of our favourite activities in India so far. It is so colourful and panoramic and like nothing we have ever seen before and we know that our pictures could not come close to capturing it.

The only downside to Varanasi was the unrelenting masses of touts. Everywhere we went we received offers for boat rides, massages, postcards and trips to view silk shops with "unbeatable prices." Each time we were assured that we would be receiving the "true Indian price." They were hard to shake because they would start off being helpful and friendly only to slip into the conversation that their uncle owns a silk shop and it would take no time at all to have a look. We got to be quite skilled at avoiding tourist traps.


Yesterday we arrived in Agra, home of the Taj Mahal. The relatively huge amount of tourists that we have seen since we left Kanpur has meant that we are no longer local celebrities, although many Indians have been telling James that he looks like James Bond. Sometimes they mistake him for being Indian, and won't believe him when he says that his hair is naturally that dark. No one makes the same mistake about Antonia, although one man on the train did comment on how impressively large her thighs are, calling them 'good construction.' 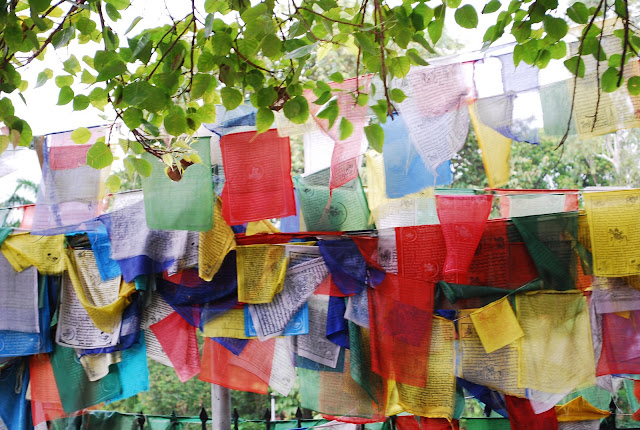